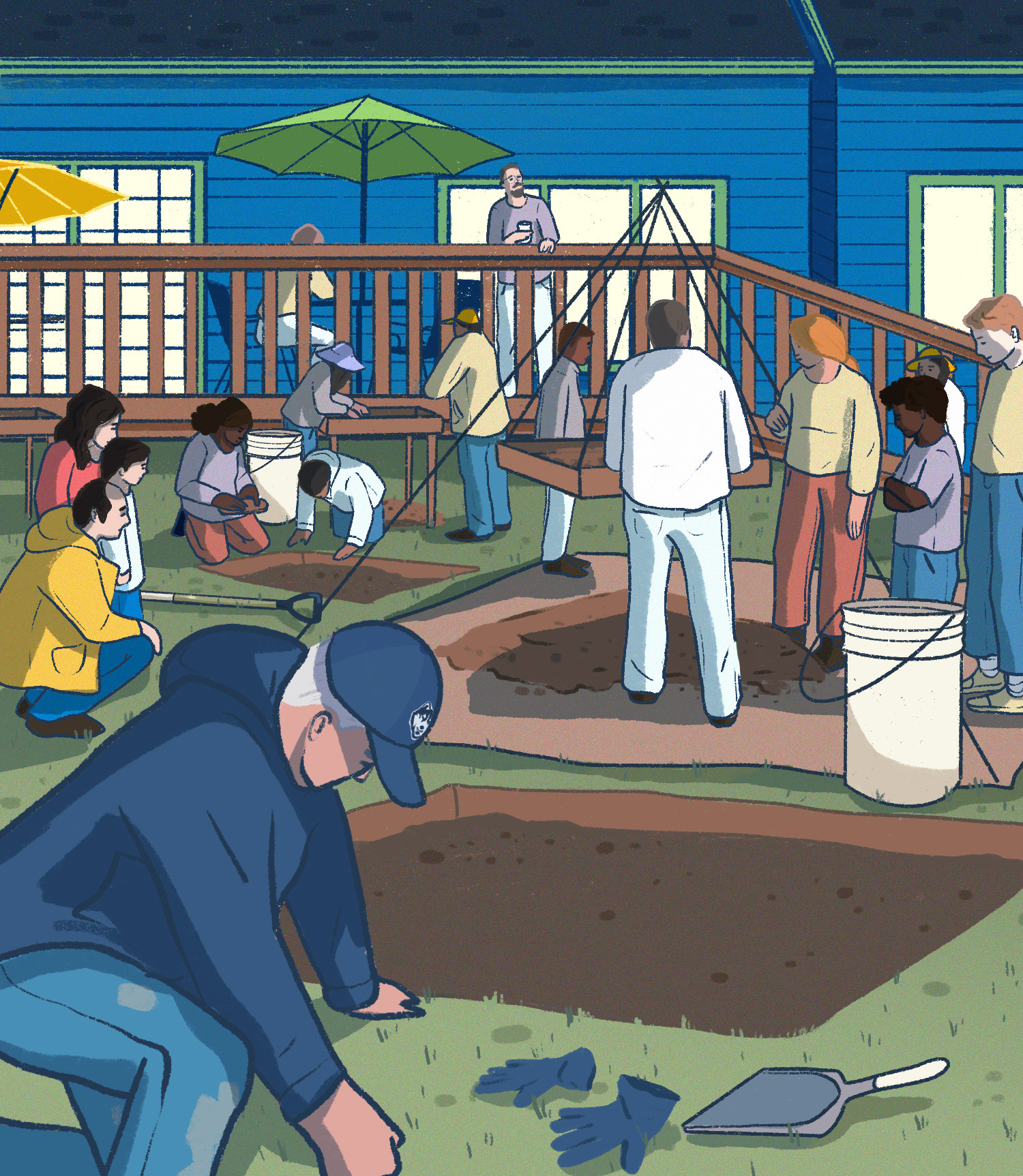 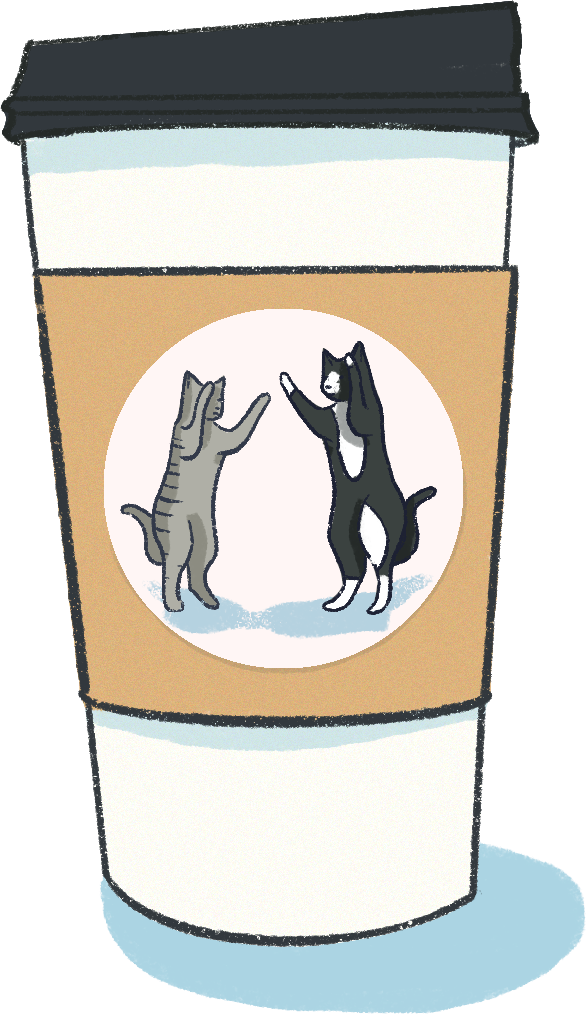 “I looked down and thought, ‘That shouldn’t be here.’” 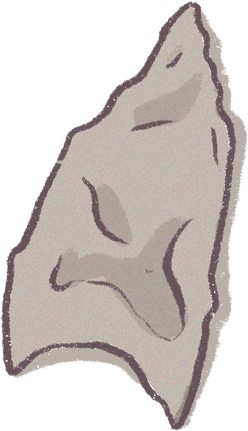 One day in May 2020, while settling on the porch of the Two Wrasslin’ Cats coffee shop in East Haddam, Connecticut, archaeologist Mark Clymer glanced down and noticed something left behind by someone who had been at the same spot before him — around 12,000 years ago.

Clymer knew right away the small tool he spied was made of a type of sedimentary rock called Normanskill Chert, which could not have come from anywhere near where he sat but would have originated instead in the Hudson Valley region over 100 miles away.

Clymer, who’s studied the past and had an eye out for artifacts since his childhood in New York State, told the shop’s owner, Mark Thiede ’86 Ph.D., that there was something interesting underfoot in the patio area and asked if he could dig a few exploratory test pits.

Thiede gave the green light, and Clymer started digging a 50-by-50-centimeter (roughly 20-by-20-inch) test pit. “I started finding more material, chips, and possible tools made of this Normanskill Chert. I knew there was something going on here.”

Clymer got in touch with archaeologists Sarah Sportman ’11 Ph.D. and David Leslie ’16 Ph.D. to tell them about the exciting find. “They came out to take a closer look at it, and the rest is history,” Clymer says.

In the two-plus years since then, the team has returned a handful of times, each visit yielding new and exciting finds pointing back to the Pleistocene epoch, which ended roughly 11,700 years ago. What started with pure — if well-informed — luck is now another site that is part of a growing list positioning Connecticut as a center of research about the region’s earliest human inhabitants.

“We’re more confident than ever that this is the real deal.”

At a dig on an overcast, late September day, the group works and chats while digging and sifting the soil and cataloging the finds.

Curious customers stop by while sipping their coffee. Some ask questions, while others insist they don’t want to slow the work, and just watch the dig proceed.

With hand spades, a few team members carefully loosen the dirt, working around some large stones. The site is laid out in a grid pattern so the locations where artifacts are found can be recorded and cataloged. Loosened soil is loaded into buckets and brought up to sifting trays fitted with hardware cloth to separate out potentially exciting finds.

“We have an interesting and very early site here, and the location is perfect,” says Clymer, pointing past the patio toward a brook behind the coffee shop. “It gets marshy back there, and you can just imagine the migratory caribou herds coming through here, and these people were likely following and hunting. This spot is just ideal.”

Leslie mentions the site’s closeness to the creek is also likely a reason why the team does not need to dig down too far: some pits are only about 11 inches deep, some 20. Even after thousands of years, the way soil has been deposited and removed in flooding events means the amount covering the artifacts is not as deep as one might expect.

Excavating what is left behind, layer by layer, gives glimpses into life across millennia.

And each dig has uncovered more supporting evidence to indicate that the oldest artifacts were left by the first people of Connecticut, referred to by archaeologists as “Paleoindians.” These people were hunter-gatherers, moving seasonally across the landscape at the end of the last Ice Age, between 10,000 and 13,000 years ago. “Sites dating from this time period are rare,” says Sportman, the Connecticut State Archaeologist and a UConn Extension professor.

“A lot of activity occurred here over the last couple centuries,” she says. “We’re finding ceramics, we found a half penny from the 19th century last year. We have found old glass, coal; there is all sorts of evidence from other time periods. It really showcases how the landscape has been used by people over the past 10,000 years, layers upon one another.” 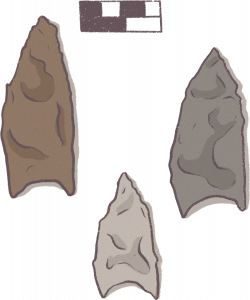 Leslie says that near the cafe’s fountain, the team found tools that would have been used to scrape animal hides to remove fat or sinew so they could be turned into clothing or shelter, not unlike the canopies that now shield the dig from the rain. They also found projectile points that are considered very indicative of the Paleoindian period. “They are big spear points that have a groove through the middle, called a flute, that’s worked into the point,” Sportman explains. “What we found was the flake of stone that’s taken out to make the groove. We’re more confident than ever that this is the real deal.”

A case in point: the September 2021 dig turned up another fluted projectile-point fragment.

The creators of the artifacts — the Paleoindians — likely followed herds of caribou over long distances, possibly throughout the year. They were purveyors of fine-quality stone, choosing only the best raw materials possible for making their tools as they traveled.

The stone they preferred, though, is not found in Connecticut, which is why it stood out to Clymer. And it didn’t take long to unearth the site’s broader significance.

“We found the chip, the first real channel flakes … within the first half an hour of digging,” Leslie says. “It was exciting because it doesn’t always work like that.” 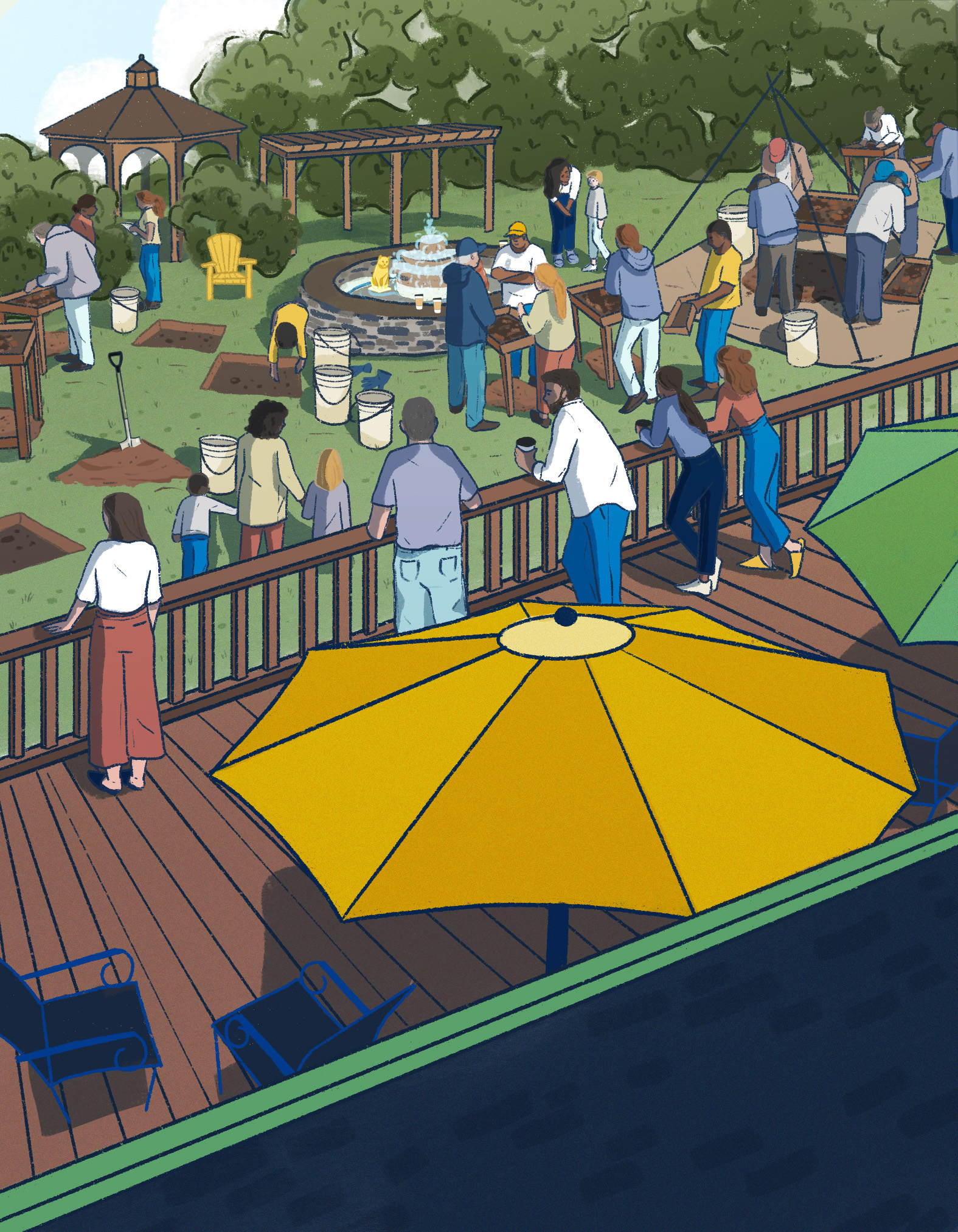 “I really think about how random it is that something like this occurs.”

The coffee shop on the site, Two Wrasslin’ Cats, is eclectic and cozy, the kind of place that’s full of stories, so it’s hardly a surprise to find something as unusual as an active archeological site
in the backyard.

“This place here was built in 1784, and I bought it with the plan to turn it into a coffee shop in 2012, sort of an ‘in-between retirement,’” says Thiede, the owner, who earned his Ph.D. in molecular biology at UConn in 1986 and went on to a 26-year career in pharmaceutical research. He says he was inspired by the hip coffeehouse scene in Seattle in the late 1990s to try opening his own shop in Connecticut.

“I was a scientist and I thought I’d try to run a business. I had no idea what I was doing when I started, but I bought this beautiful property and named it after my cats.”

The two wrasslin’ cats were Bruno and Larry, named for professional wrestlers Bruno Sammartino and Larry Zbyszko because they loved to tussle. The shop is adorned with all manner of cat-themed memorabilia, which Thiede says were almost entirely contributed by members of the community. The oddities are everywhere you turn; among the more typical cat figurines and classic art deco Kit-Cat Klock are such oddities as framed hairballs, Bruno and Larry’s ashes on the fireplace mantel, bread art, and needle-felted replicas of Bruno and Larry made for Thiede by a student from Maine.

Community connection is vital to the excavation project, too. From the volunteer involvement in the dig to children sifting soil as a hands-on archaeology lesson, the atmosphere is supportive and productive. The work would be too much for one person, and Sportman notes that without the help of the nonprofit Friends of the Office of the State Archaeologist (FOSA) and the community, Connecticut would be missing out on this important glimpse of the past.

During the September dig, one regular customer brought artifacts she had found over the years to ask the archaeologists about. Leslie and Sportman, taking their break for lunch, were happy to describe the significance of the finds. 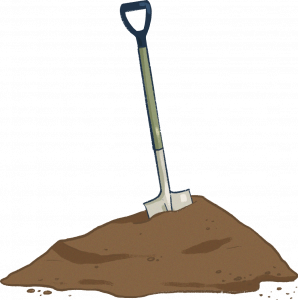 In her roles as State Archaeologist and an Extension educator, Sportman fulfills part of UConn’s mission as a land-grant university, serving as a resource on her discipline, engaging and sharing knowledge with the public. The Wrasslin’ Cats site is the perfect opportunity for laypeople to interact with the experts, ask questions, and experience the research process as it happens.

Thiede hopes to host an event at the shop for the team to present its findings. “I really think about how random it is that something like this occurs,” he says.

Random, too, that someone like Thiede owns this property. The team is grateful for the opportunity to conduct research they realize can be disruptive, especially at the height of the pandemic when outdoor seating for coffee shops was at a premium.

“Lots of times you have property owners like Mark who are just excited to be part of the process and learning about the site,” says Sportman. “Then other times there are people who don’t want anybody to know that they’re there, because they just don’t want the attention on their property. On private land or state or federal land, it’s different. This is a purely research-driven project. There’s no reason to do it, other than the fact that everybody’s really interested.”

“Though I didn’t uncover the artifact, I’m a facilitator,” says Thiede, who is as fascinated by the artifacts as the archaeologists are. “They got more and more excited as they moved along. I found out that they designated the archaeological site as the Two Wrasslin’ Cats Site, and that was really cool. I’m just very humbled by their enthusiasm and what they’ve done over the past couple of years, getting the science done.” 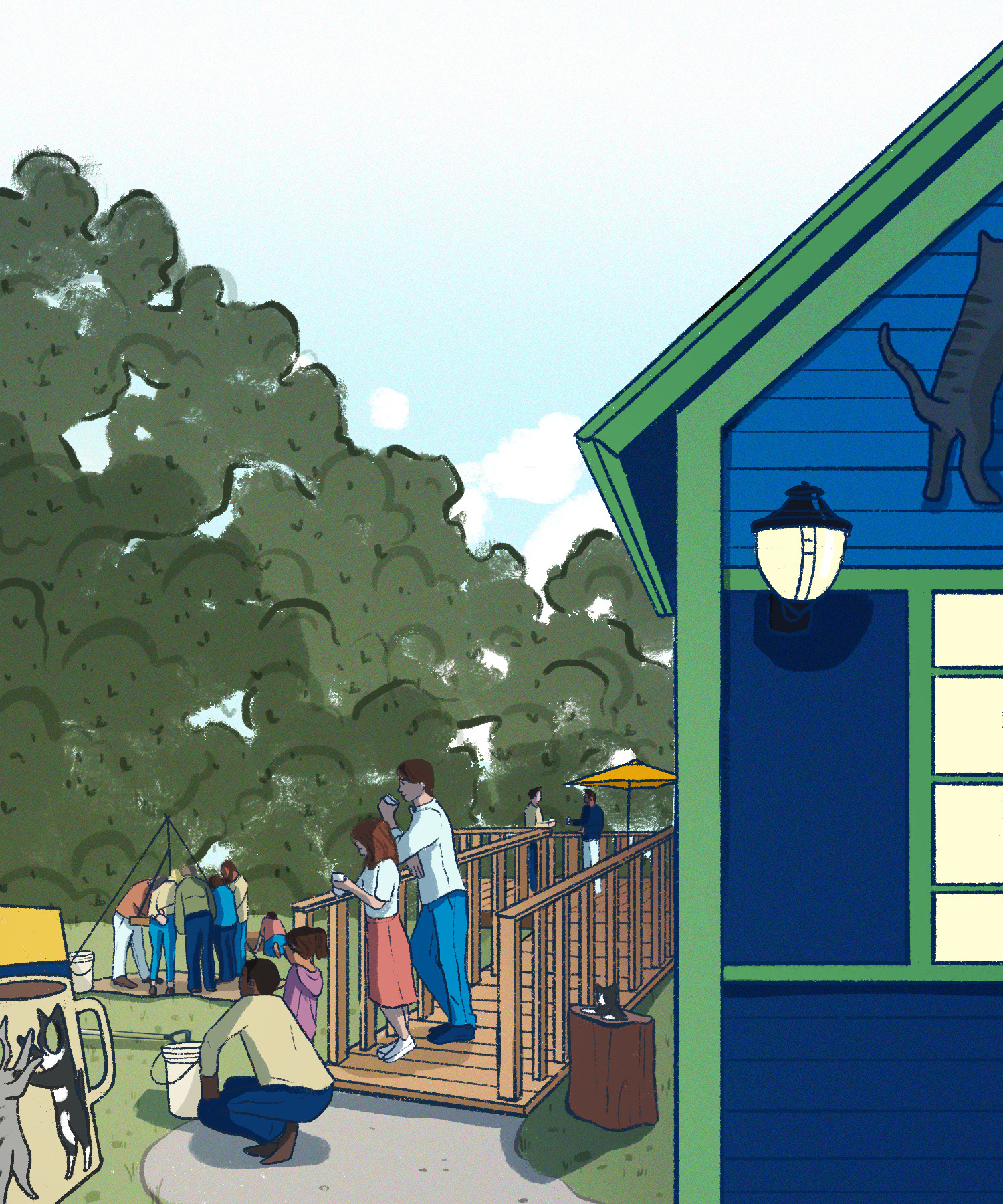 “There could be sites like this all over, you just have to know what to look for.”

The Wrasslin’ Cats Site story is a great example of why it’s important for budding and professional archaeologists to look out for artifacts in the ground.

“Yeah, you get a lot of sunburns on the back of your neck,” Leslie quips.

The most recent major Paleoindian discovery in Connecticut was in 2019 in Avon. Though most sites, like Wrasslin’ Cats, are found by chance, the site in Avon was a compliance dig, meaning the site had to be carefully excavated prior to construction, since it used federal funding.

The site provides the oldest evidence to date of human occupation in the state and, along with the work of Zachary Singer ’17 Ph.D. at the Templeton Paleoindian Site in the Litchfield County town of Washington, provides important new information about Paleoindian ways of life. The newly discovered sites have called into question old models for locating Paleoindian sites, says Sportman, and provided opportunities to apply new technologies to uncover more about what the Pleistocene landscape was like.

The people who left the tools at the Wrasslin’ Cats Site were likely not there for long, says Sportman, noting the lack of more permanent structures like hearths or post holes. What the team has found so far shows a group of hunters and skilled artisans stopping for a time to make and repair tools, and perhaps process hides. Further digs and research, the archaeologists hope, will reveal more about the Paleoindians.

“We’re just getting started,” Sportman says. “There’s a lot of potential here for adding to the database of information about this period because we really just don’t know that much about it yet.”

Sites like Two Wrasslin’ Cats are important because they will help fill the knowledge gap about our earliest predecessors, and hopefully change the way history is taught.

“I remember learning history starting when the Pilgrims arrived,” FOSA member Scott Brady says. “We were taught that there were Native people here, but nothing about the 10,000 years before that. I think these sites can teach all of us a lot about what really was happening here for a long, long time. The signs of that are everywhere. It’s just not as obvious. There could be sites like this all over, you just have to know what to look for.”

Thiede marvels at how close the project came to never getting started.

“If Mark hadn’t shown up, this research wouldn’t be happening,” he says. “Somebody would likely have picked that stone up and just thrown it in the brook.” 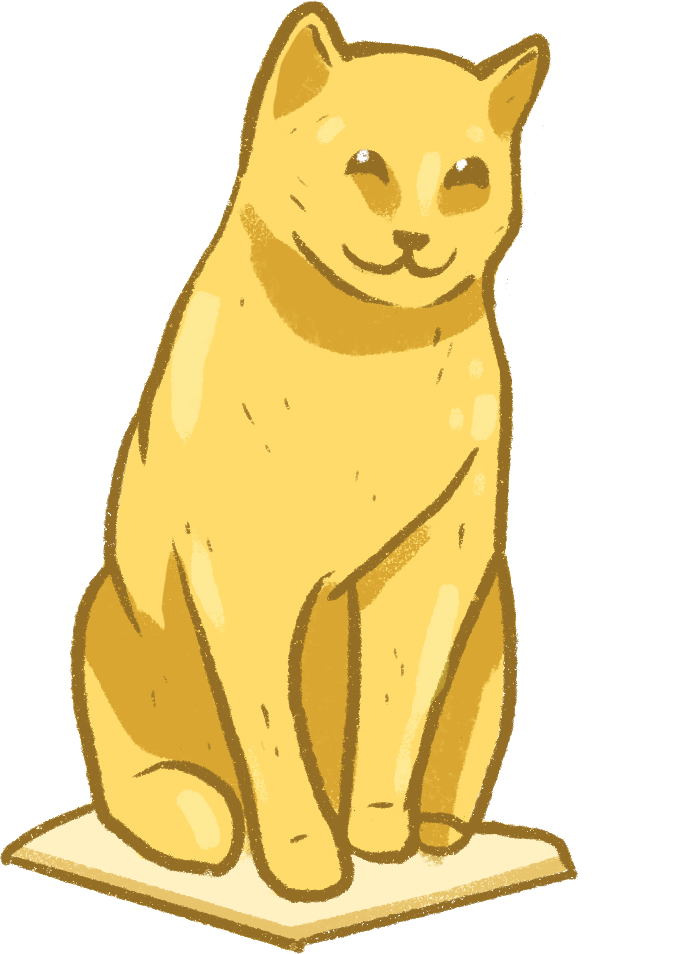