Your classmates want to know about — and see — the milestones in your life. Send us news about weddings, births, new jobs, new publications, and more — along with hi-res photos — to: Alumni News & Notes, UConn Foundation, 2384 Alumni Drive, Unit 3053, Storrs, CT 06269.

Paul J. Magnarella ’59 (BUS) published “Black Panther in Exile: The Pete O’Neal Story,” about an influential member of the Black Panther movement who was arrested in 1969 and convicted for transporting a shotgun across state lines. In the book, Magnarella, a veteran of the United Nations Criminal Tribunals and O’Neal’s attorney during his appeals process, describes his legal appeals to overturn what he argues was a wrongful conviction.

Clifford L. Bampton ’60 (CAHNR) writes in with a life update. He’s been retired for 24 years and lives with his wife, Linda, on their farm in Pittsboro, North Carolina. Previously, he held various leadership positions for Ducks Unlimited Inc. Before that, he was a district game biologist and supervisor of western Wildlife Management Areas and assistant executive director of the North Carolina Wildlife Resources Commission.

Rance A. Velapoldi ’60 (CLAS) has lived in Norway with his wife since he retired in 1999. The two travel the world visiting such places as South Africa, China, Tibet, Nepal, Peru, Italy, France, Georgia, and Armenia as well as visiting their children and grandchildren in the U.S. two to three times per year. They split their time between Norway and the U.S., where Velapoldi’s chemical career covered industry, academia, and government; where he spent 30 years of his research career at the National Institute for Standards and Technology (formerly the National Bureau of Standards). One of the years in government was spent working on Senator John Glenn’s committees of Energy, Nuclear Proliferation, and Government Services and Government Affairs. He also worked for five months at Hebrew University, Israel, as the first American exchange scientist under the Public Law (PL) 480 Program and one year performing research at Norsk Hydro’s Geology Division in Bergen, Norway.

Congratulations to Joel Mandell ’61 (CLAS), ’66 JD and Ellen Solomon Mandell ’64 (CLAS), who met at UConn Hillel mixer in 1960 and celebrated their 55th anniversary in August 2019! Joel retired from the Connecticut Attorneys Title Insurance Co. in 2009. The pair lived for 43 years in Simsbury, Connecticut, where Joel served as an elected member of the Simsbury board of selectmen for 14 years and Ellen was saluted as a Simsbury Hometown Hero in 2002. They moved to Indian Land, South Carolina, in 2010 and have three sons, two daughters-in-law, and four grandchildren.

Jeffery M. Dorwart ’65 (CLAS), a professor emeritus at Rutgers University, has published his tenth book: “Dorwart’s History of the Office of Naval Intelligence, 1865–1945.”

Congrats to Barbara Hatcher ’67 (NURS), who was inducted into the Washington, D.C., Hall of Fame for her varied and continued work in improving the health for the citizens of the D.C. area. Hatcher achieved many breakthroughs over the course of 51 years of nursing, instigated system-wide change, and provided leadership in health care policy and practice. Among those, she was the first nurse to sit on the March of Dimes Medical Advisory Committee of the metropolitan D.C. area and was the first woman, African American, and nurse to serve as secretary general of the World Federation of Public Health Associations. She retired in 2018 as a faculty member of George Mason University’s School of Nursing and is now principal of The Hatcher-DuBois-Odrick Group, LLC, a health care consulting firm.

Husky love is built to last. Carol A. (Bober) Erickson ’68 (NUR) writes in to say she met her husband, Paul F. Erickson ’65 (CLAS), on a blind date at UConn in 1965 and, this past September, they celebrated their 51st anniversary! She reports that he retired last year and she is still working full time as a school nurse. Congratulations!

Congrats also to Anthony “Tony” J. Pulino ’69 (ED), who competed at UConn in track and cross-country from 1965 to 1967 and recently was inducted into the Middletown (Connecticut) Sports Hall of Fame.

And Philip Madell ’69 (CLAS), of Topsfield, Mass., reports that he was appointed to the Massachusetts Board of Library Commissioners by Gov. Charles D. Baker. A lawyer in private practice, he also serves as legal counsel to the National Counter Intelligence Corps Association. Previously, he served in state government in Kansas, was a consultant to the California Assembly, taught at several colleges, and held senior management positions in the private sector.

Paul A. Michelson ’71 (PHR) reports that he is retired and living with his wife, Suzanne, in Harrisburg, Pa. After UConn, he went on to earn a master’s and a doctorate in pharmacy. He has published 20 papers and presented at major pharmacy meetings. As a clinical pharmacist, his major interest was in infectious diseases and antibiotics. He’s also an avid cruiser and stamp collector.

Gary Hunt ’72 (CLAS), ’74 (SFA) also checked in with a life update. In 1990, he started a children’s charity, Bookbag Santa, which donates 1.5 to 2 tons of used school supplies to disadvantaged children in the U.S. and overseas. Every summer, he gets a group of 30 to 40 volunteers together to make a delivery trip to three schools in Belize. Find more information at bookbagsanta.com.

Nostrovia! to Vladimir Wozniuk ’75 (CLAS), who has published “The Karamazov Correspondence: Letters of Vladimir S. Soloviev,” the first fully annotated and chronologically arranged collection of the Russian philosopher-poet’s most important letters. Soloviev was known for his close association with author Fyodor M. Dostoevsky, and the letters reflect many of the qualities and contradictions that personify the title characters of Dostoevsky’s last novel, “The Brothers Karamazov.” 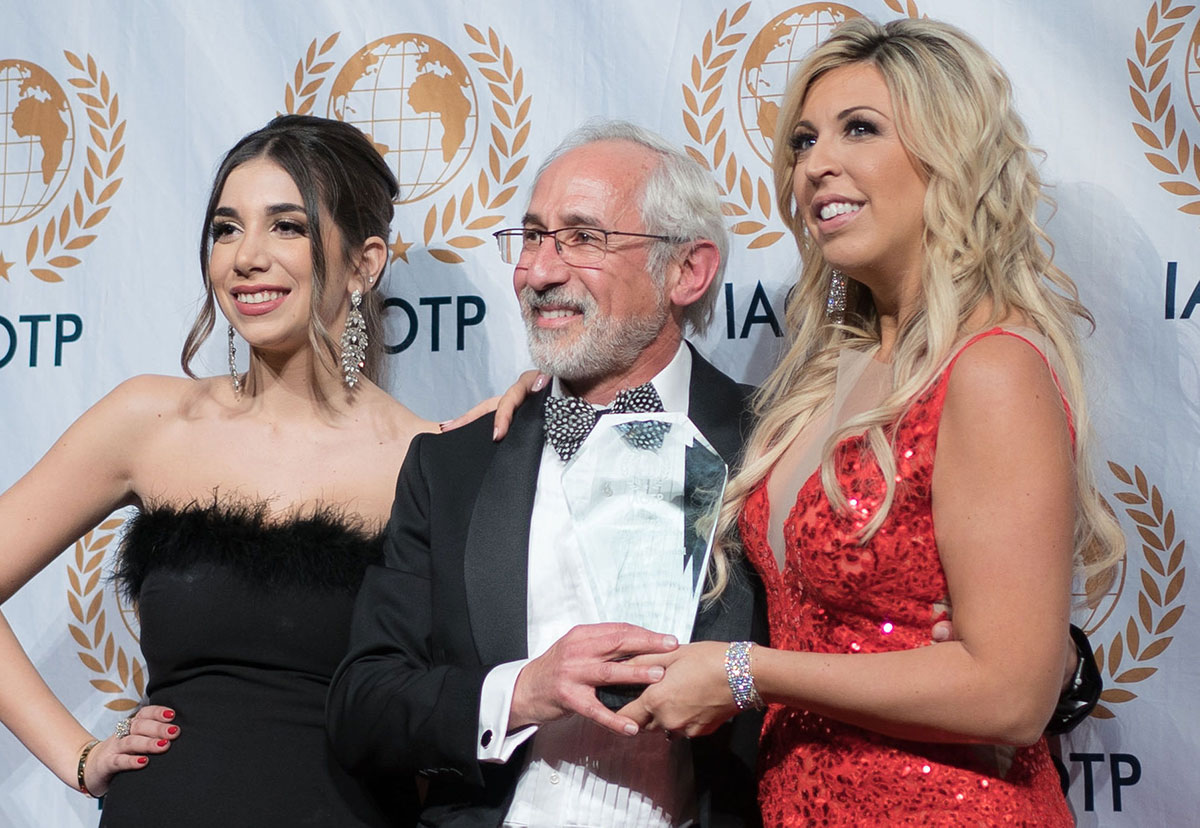 And the award goes to: David Fetterman ’76 (CLAS), who received the Presidential Award from the American Anthropological Association in Vancouver for his contributions to applied anthropology. In addition, the International Association of Top Professionals named him Top Anthropologist of 2019 at an awards gala in Las Vegas.

Tom Morganti ’76 (CAHNR), a veterinarian, reports that he is living in Avon, Connecticut, “with a bunch of animals and humans” and has published his fifth book, “The Manticore Affair and Others: Nine Tales of Disquiet and Unease.”

Christopher F. Droney ’79 JD, ’16 H is stepping down from the bench. He retired as a senior judge for the U.S. Court of Appeals for the Second Circuit and returned to Day Pitney LLP as a partner in its litigation department. He was appointed to the appeals court by President Barack Obama in 2011 after serving 14 years as a judge for the U.S. District Court in Connecticut. He previously served as U.S. Attorney for Connecticut and was mayor of West Hartford.

Meanwhile, Brian Doyle ’81 (BUS) checked in from the Iron Sharpens Iron ministry, a religious organization for men and teenaged boys. Doyle, who is president, founder, and national director, reports that the Christian organization hosts conferences across the country and has served a total of about 500,000 men.

Tune in to Marianne Evans-Ramsay’s ’83 (CAHNR) new podcast “Sweet Support” for people with pre-diabetes and diabetes. She’s a dietician and certified diabetes care and education specialist at Wentworth Douglass Hospital in Dover, New Hampshire, and developed the podcast with coworker Megrette Fletcher.

David Samuels ’83 (BUS) was elected to board of directors of the Wolf Trap Foundation for the Performing Arts, which partners with the National Park Service to provide concerts and performances in the park, located in Vienna, Virginia.

Kudos to Marcia L. Marien ’84 (BUS), finance director controller for the town of Brookfield, Connecticut, who was honored for her distinguished service by CTCPA Women through an awards program celebrating Connecticut’s exceptional CPAs.

Susan (Pearson) Gambardella ’85 (CLAS) made a major career move. After more than 25 years at the Coca-Cola Co., including serving as chief of staff for longtime CEO and chairman Muhtar Kent, she joined Kimberly-Clark in January as president of North America for Kimberly-Clark Professional.

Also, classmate Bernie Gracy ’85 (ENG) was named Boston CIO of the Year in the enterprise segment and presented with an ORBIE Award, which recognizes leadership, innovation, and vision in technology executives. He is chief digital officer for Agero in Medford, Massachusetts.

Speaking of awards, Jessica Sarin-Perry ’87 (SFA) won the Berklee College of Music Professional Education Division Dean’s Award for Teaching Excellence. She is a full-time faculty member in Berklee’s professional music major. Outside of Berklee, she’s a singer/songwriter and leader of the Jes Perry Band, teaches private voice lessons, and serves as a board member of Berkshire Choral International.