A Voice for the Most Vulnerable

Brillhart with one of her charges, Anthony, on the day he was adopted. His new family stays in touch. 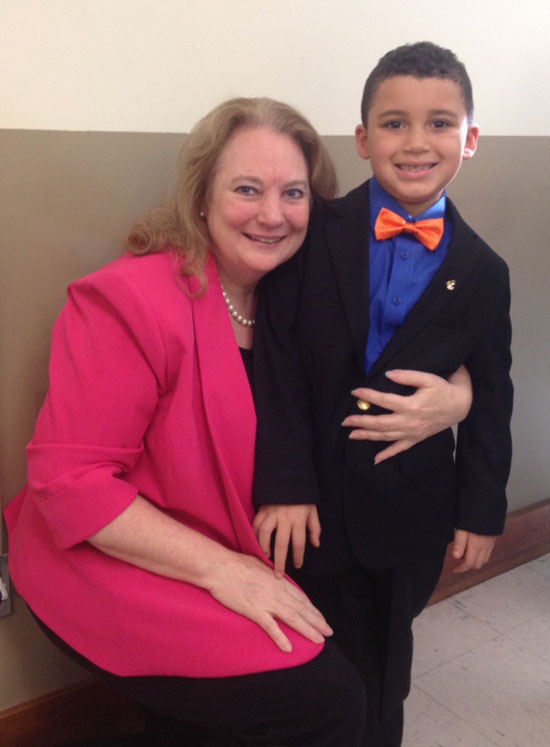 The calls come at all hours. Hard calls, wrenching calls. Like the one that had Susan Brillhart driving from her Hoboken, New Jersey, home to the neonatal intensive care unit at Children’s Hospital of Philadelphia so she could advocate for a tiny baby in foster care.
Born 13 weeks premature, the baby tested positive for drugs, was taken from her mother, and released from a New Jersey hospital at 34 weeks to relatives who were named foster parents.

“But they took her out to soccer games and all over and she was still so vulnerable and she got really sick,” says Brillhart. The baby went into cardiac arrest four times by the time she arrived by helicopter at Children’s Hospital. When Brillhart got there, the radiologist told her the baby’s brain scans “were devastating” and she was on full life support.

A court-appointed special advocate at CASA, a Hudson County, New Jersey, nonprofit organization, Brillhart is a voice for “the most vulnerable among us,” medically fragile babies and toddlers placed in foster care because of neglect or abuse by their parent or guardian.
“I don’t work for the courts, I’m there to represent the best interest of the child,” she says. Like that baby — who recovered.

“It made no medical sense, but then babies don’t read medical books. That’s why I love little kids; they grow and don’t know how to give up, and they survive things that they shouldn’t. People toss the word ‘miracle’ around loosely, but there are times when it really applies.”

The baby’s mother, who also had a son with cardiac problems, worked closely with a child services caseworker and Brillhart to learn how to care for her chronically ill children. Over time, the mom and her children were reunited. “They are all doing really well,” says Brillhart.

It’s advocacy work Brillhart has been training for her whole life. While a senior at UConn’s School of Nursing, Mount Sinai Medical Center recruited her to work on its Infant/Toddler Unit, starting a 30-year career as a pediatric nurse, manager, professor (she has a Ph.D. in nursing science); and nurse practitioner. In 2000, she landed her “dream job,” coordinating the care of 150 chronically ill children in New York’s foster care system. On call 24/7/365 “with my pager clipped to my pj’s,” she became exhausted, developed cardiac arrhythmias, and reluctantly left to return to teaching nursing full-time.

An assistant professor of nursing at the College of Staten Island, City University of New York, she was happy to be teaching the next generation of nurses but missed caring for young patients. So, when she spotted a newspaper ad asking Would you like to advocate for children?, her answer was a resounding yes.

Fifteen years later, she is “our longest- standing volunteer, and she’s had more cases than anyone,” says Beverly Savage, CASA’s executive director. “No one is more qualified or more dedicated.” While CASA asks volunteers to commit to one year advocating for a child, case supervisor Georgia Lavey says Brillhart has stayed with cases for years until a child is adopted or reunified with a parent. She has been part of 14 reunifications and seven adoptions and her phone brims with texts and birthday party photos of “her kids.”
Her commitment, she says, has its roots in two places: first, her parents, who were foster parents “and had that house where all the kids were ­— not a lot of money but a loving and happy place — that was our house.”

The second is UConn’s School of Nursing: “UConn connected me to professors who modeled excellence,” says Brillhart. “It was implied — you work hard and advocate well because your patient’s outcome depends on you. This is your opportunity to positively change their lives. That’s always stayed with me.”