Politics of Crime and Justice (POL 3827)

Bergendahl at the Brooklyn Correctional Institution in Brooklyn, Connecticut. The professor wants students to see how the law works in real life, so she introduced community-based service programs to her class’s curriculum, including the opportunity to tutor inmates at BCI. 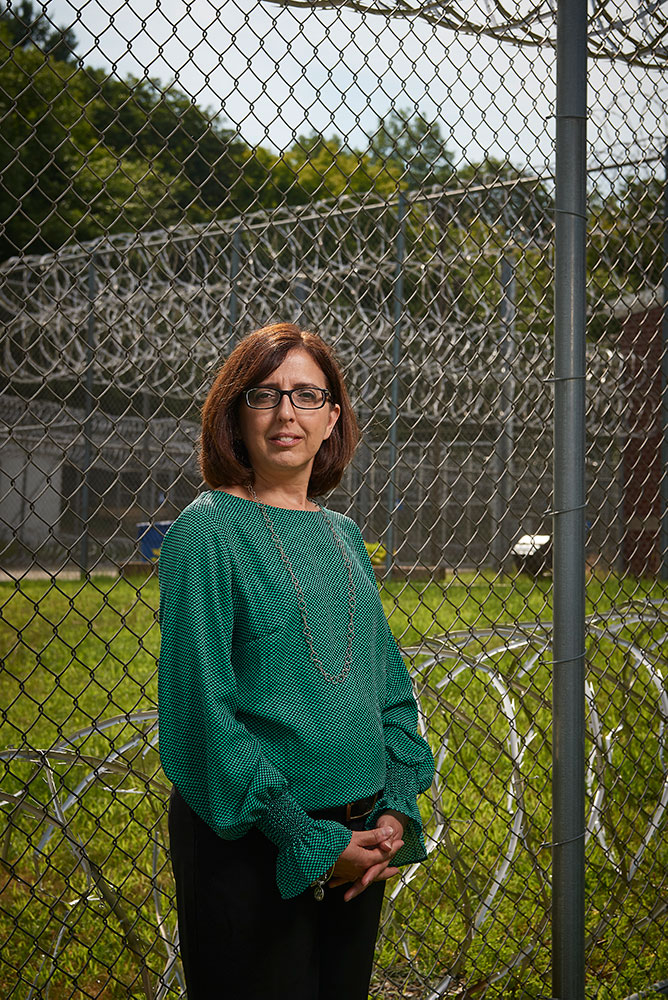 Bergendahl at the Brooklyn Correctional Institute in Brooklyn, Connecticut. The professor wants students to see how the law works in real life, so she introduced community-based service programs to her class’s curriculum, including the opportunity to tutor inmates at BCI.

The Instructor:
Kimberly Bergendahl’s interest in justice and the law started when she was just 7 years old. Her father’s struggle with alcohol was rocky at times and the Tiverton, Rhode Island, police came to her home more than once. After her parents divorced, Bergendahl, still in her preteens, discovered her voice, arguing frequently with a crusty landlord when she believed he was failing to uphold his side of the bargain in keeping her mother’s subsidized four-room apartment properly maintained.

It is exactly that experience that assistant professor Bergendahl believes makes her a better instructor when it comes to teaching “The Politics of Crime and Justice.”

“I’ve seen the law from the good end and I’ve seen it from the bad end,” says Bergendahl. “I want my students to see me as a person who has had real world experiences and not just someone who comes in professing to know everything or who is looking to present one particular point of view. My students know that I don’t use the class as a soapbox to promote a specific agenda.”

But that is not to say Bergendahl is without convictions. She has always been a person committed to righting wrongs, holding people in power accountable, and making sure individuals are treated fairly under the law.

“I think it comes from my background of always being the underdog. My mother and I weren’t financially comfortable. It was just the two of us. So after my parents divorced and we moved into an apartment, I was the one often dealing with the landlord, and I was pretty vocal,” Bergendahl says with a chuckle. “Even though I was basically a shy person, if there was something I thought was right, I would stand up for it.”

Class Description:
By sharing her personal experiences and doing classroom simulations, Bergendahl shows students how the law she teaches in class works in real life. The class begins with a general overview of the purpose and philosophy behind the criminal justice system and different types of crimes and punishment. Bergendahl then focuses on individual parts of the justice system.

“I hope students leave the course with a more realistic understanding of the system from all perspectives,” says Bergendahl.“I would like them to realize that it is not a one-size-fits-all point of view of law enforcement, prosecutors, or judges — that is why we call it ‘The Politics of Crime and Justice,’ because there are different political decisions and political actions that each one of these actors undertakes.

“Just because the law and the Constitution say what kinds of rights exist, we see that those rights have been interpreted in different ways throughout history. I also hope the students see how each actor influences the others. If law enforcement doesn’t do its job, it makes the prosecutor’s job harder and so on. I don’t expect them to remember everything, but they should at least know how all of the interdependent parts work together and what that means for the rights of individuals who move through the system.”

Bergendahl’s Teaching Style:
The highlights of the class are the classroom simulations. When discussing law enforcement, for example, Bergendahl shows a video that puts students in the role of a police officer responding to a call. The situation escalates and ends with the officer (and the class) having to decide whether the officer should fire his weapon. The officer is white and the other person black. Justification for the use of deadly force is far from clear.

“It generates a lot of discussion,” says Bergendahl. “It puts students in a position where they have to make a potentially life-and-death decision very quickly. It helps them understand and maybe appreciate things from both the law enforcement perspective and from the perspective of those who encounter the police.”

As a follow-up to the simulation, UConn Police Lt. Jason Hyland speaks to the class about laws surrounding the use of force and gives students a firsthand perspective of one of the most difficult decisions officers must make in the field.

In the section in which the class discusses the role of prosecutors and defense attorneys, Bergendahl has her students manage a simulated caseload. With limited resources, the student prosecutors must decide which cases are best suited for plea bargains, which ones should go to trial, who they would recommend be kept in jail, and who should be released on bail.

“I’ll walk around the room and they’ll ask me, ‘What should we recommend for this person’s bail?’ and I tell them I don’t know,” says Bergendahl. “Do prosecutors know in the real world? There’s not a book somewhere that says bail should be this or that for this particular crime. They have to learn on the job. They need to quickly assess who that defendant is, what is the likelihood they might flee, and whether they might re-offend.”

When looking at the role of juries and judicial selection, Bergendahl splits the class into prosecutors and defense attorneys and has them pick a jury from a list of 30 potential jurors.

The last phase of the class looks at sentencing, punishment, corrections, probation, and parole.

“We talk about three strikes, the sex offender registry, the history of corrections and how it has changed, and what probation and parole are. One of my favorite things in this section is having the students watch parole board hearings for three different inmates. They have to decide whether an inmate should be released on parole based on their respective hearing. The students then get to see if their decisions matched up to what really happened. It’s fascinating.”

Why We Want to Take It Ourselves:
Several years ago, Bergendahl secured a fellowship that allowed her to add a service learning component to the course. It turned out to be one of the best decisions she ever made. That first year, students had an opportunity to work with a variety of community-based service organizations, such as the UConn Police Department, the Connecticut Office of the Victim Advocate, and Perception Programs, a nonprofit dedicated to helping people with concurrent substance abuse and mental health problems.

Some students tutored inmates at the Brooklyn Correctional Institution. Others organized a talent show for women in the Next Step Cottage at Perception Programs in Willimantic to help build their self-esteem. Both projects helped students connect with people who have been through the system, Bergendahl says. It allowed them to see these individuals not as inmates, but as real people who are working toward rehabilitation and eager to get their lives back on track.

“I want them to leave here thinking, ‘Okay, how can I become a more engaged citizen?’” says Bergendahl. “I think that is something we, as a political science department, should be doing more. We should be encouraging others to be more active citizens. Yes, we are teaching them knowledge, but it shouldn’t end there. I don’t want to just teach, I want to empower!”—Colin Poitras ’85 (CLAS)