Alum James Gagliardi is a supervisory horticulturalist at the Smithsonian Gardens in Washington, D.C.

James Gagliardi ’05 (CAHNR) has an encyclopedic mind for all things ecological, a fact quickly apparent on a tour of his gardens — which happen also to be every U.S. citizen’s gardens. Gagliardi is a supervisory horticulturalist at the Smithsonian Gardens in Washington, D.C.

As we saunter along the grounds of the Mary Livingston Ripley Garden, I request a fun fact. He glances at the plant directly to our right and says, “This species was discovered in Georgia in the 1780s by the Bartrams. They brought the seeds to Philadelphia and named the tree after their good friend Benjamin Franklin.” Pointing to a label reading simply Franklinia alatamaha, he adds, “They were never found in the wild again.”

Gagliardi has helped select, plan, and maintain the natural variety around some of the world’s most visited museums, tying each garden to the accompanying museum’s theme. “Outside the Sackler Gallery are Asian plants, going back to a Ming Dynasty aesthetic,” he says. “Outside the African Art Museum is more of an Alhambra aesthetic. Outside the American History Museum is a Victory Garden,” named for the gardens planted by millions during the world wars to ease constraints on the public food supply.

Gagliardi entered UConn as an undeclared major but had always enjoyed gardening, selling cut flowers out of his 1780s colonial home in Berlin, Conn. He joined and eventually became president of the Horticulture Club and ran its annual on-campus horticulture show. A junior year internship at Polly Hill Arboretum on Martha’s Vineyard solidified his decision to enter public horticulture for its combined focus on education, sustainability, and creating respites for people. He graduated with a major in horticulture and minors in business administration and landscape design.

Afterward, Gagliardi received his master’s in public horticulture at the University of Delaware. He joined the Smithsonian in 2011.

Last summer he transformed the popular butterfly garden to a broader “pollinator garden.” Filled with placards about the 230 plants within, he calls it “the first true ‘exhibit’ within the Smithsonian Gardens.” Inside you’ll learn, for instance, that some bumblebees buzz at the piano equivalent of a middle C note, hummingbirds consume up to 12,000 calories per day, and there are four times as many species of beetles as animals with backbones. Gagliardi notes one downside of appealing to the Snapchat generation: “We used to put 200 words on a panel. Now we’re down to 50 or so.”

Next on Gagliardi’s to-do list is an “evolution garden,” with plants dating back to the dinosaur eras, including ginkgos, bald cypress trees, and various ferns.

“Thirty million people come through our gardens each year, and UConn has had an influence on all these landscapes,” he says, and he’s not exaggerating. Horticulture professor Mark Brand bred and patented a switchgrass called ruby ribbons, which begins with blue-green foliage but turns red weeks earlier than similar switchgrasses. Gagliardi planted it between the Natural History and American History museums — right in the heart of our capital. —JESSE RIFKIN ’14 (CLAS)

Gagliardi, leftabove, notes that with no visiting hours, guards, or gates, the gardens are the only Smithsonian properties open 24/7/365. “Instead of approaching a sterile government building, you get something both aesthetically beautiful and educational,” he says.

Tour through the Smithsonian Gardens 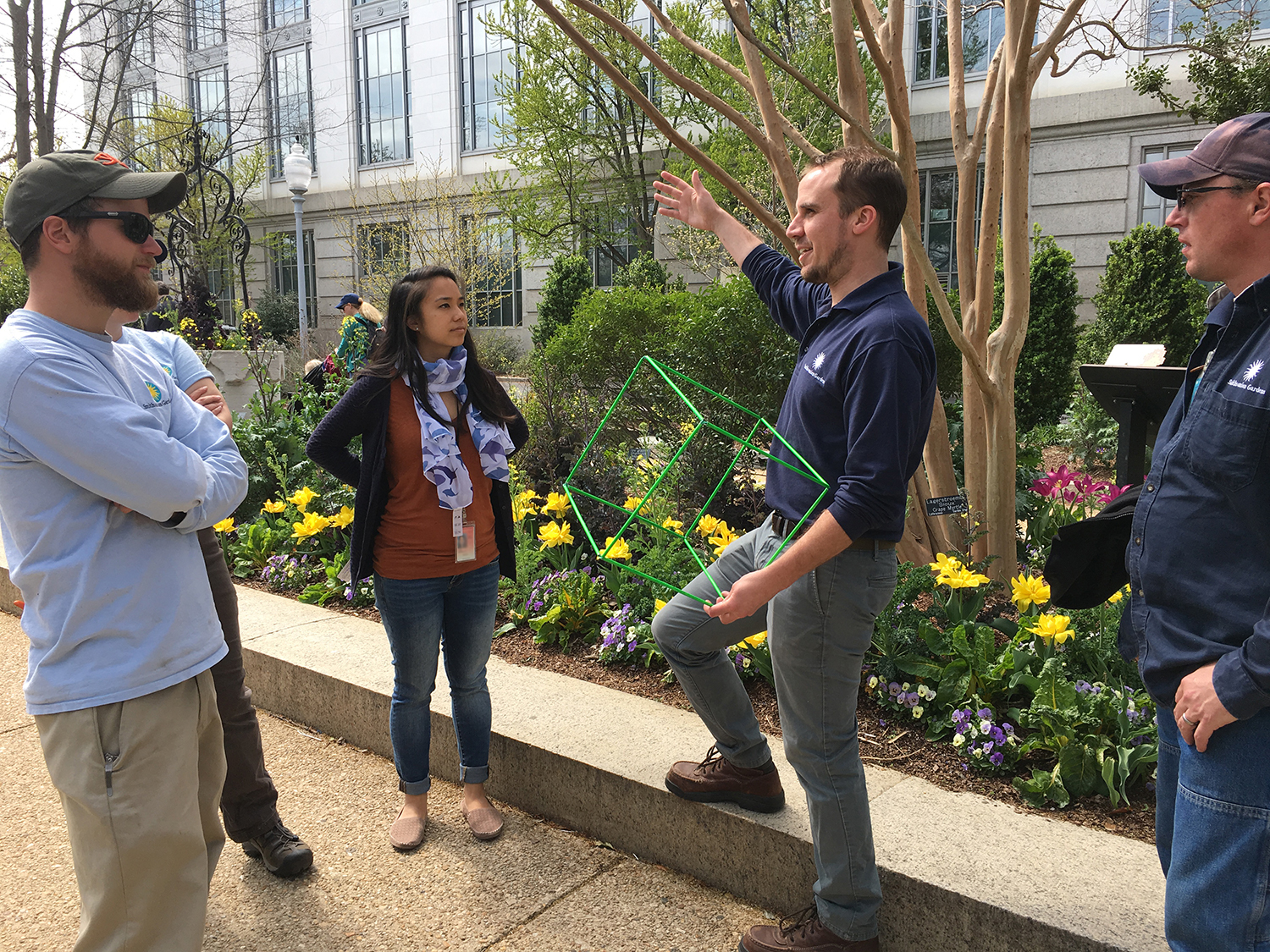 James meeting with staff of Smithsonian Gardens and the National Museum of Natural History to discuss an upcoming exhibit in the Pollinator Garden on Biocubes—the life in a cubic foot of soil or water over one day. 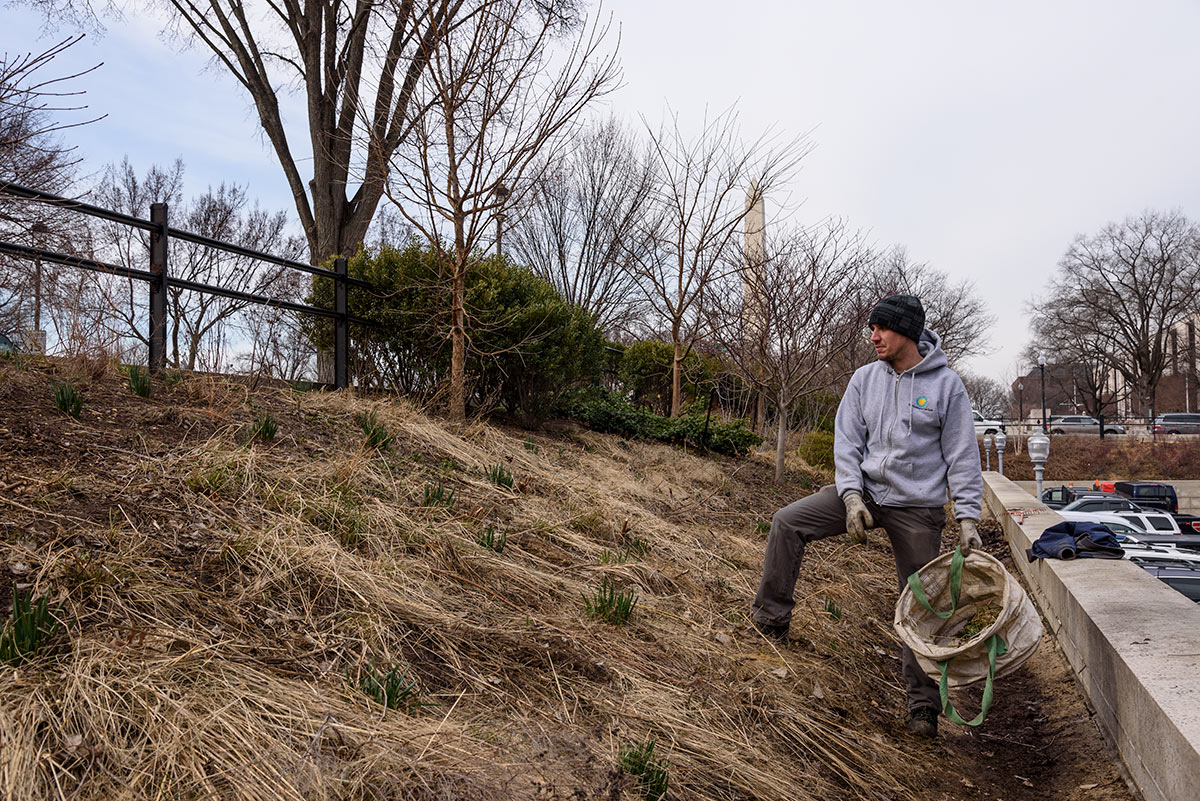 As daffodils begin to emerge James readies the gardens at the Smithsonian against the backdrop of the Washington Monument. 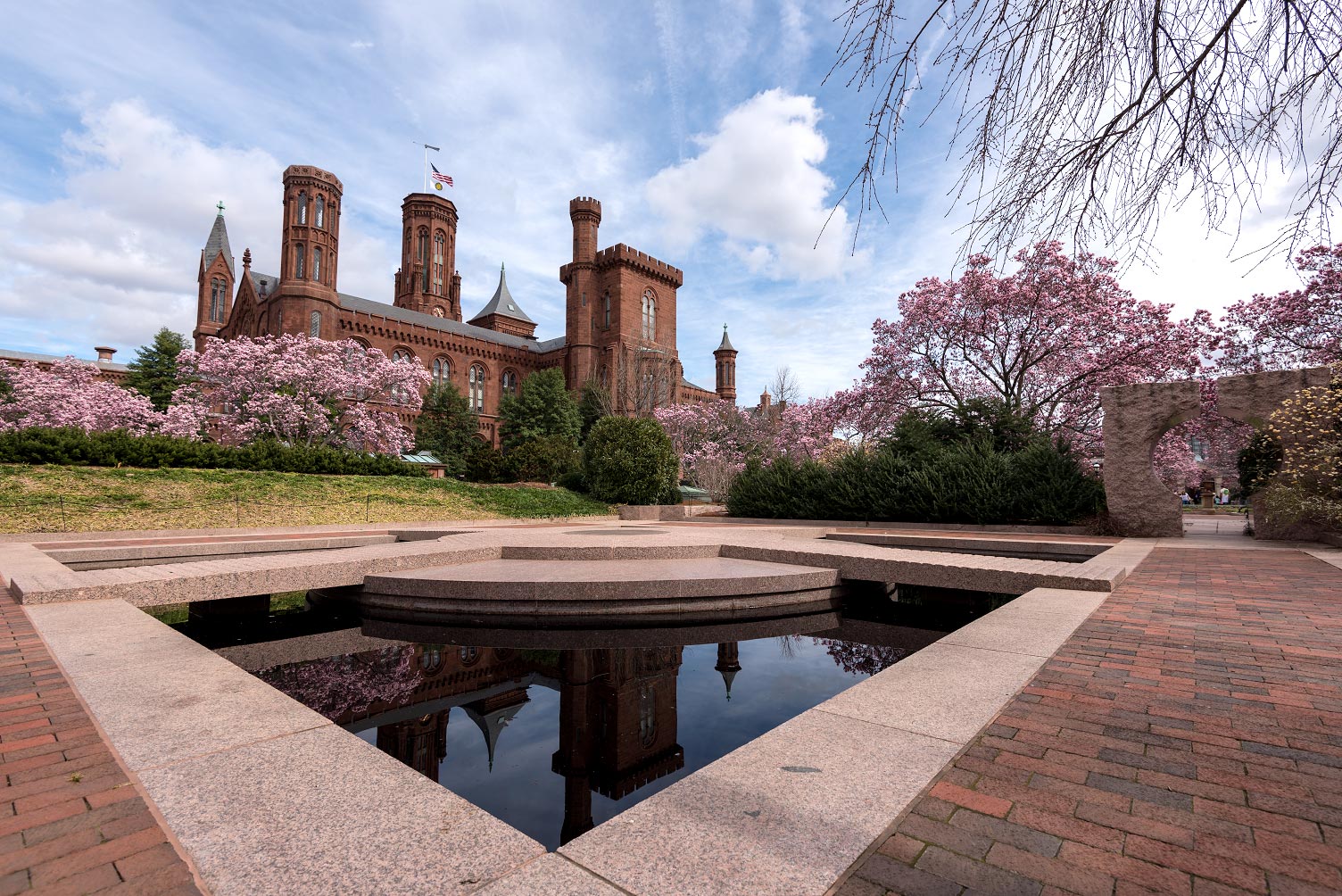 The blooming saucer magnolias in the Enid A. Haupt gardens rival the cherry blooms along the Tidal Basin during a DC Spring. 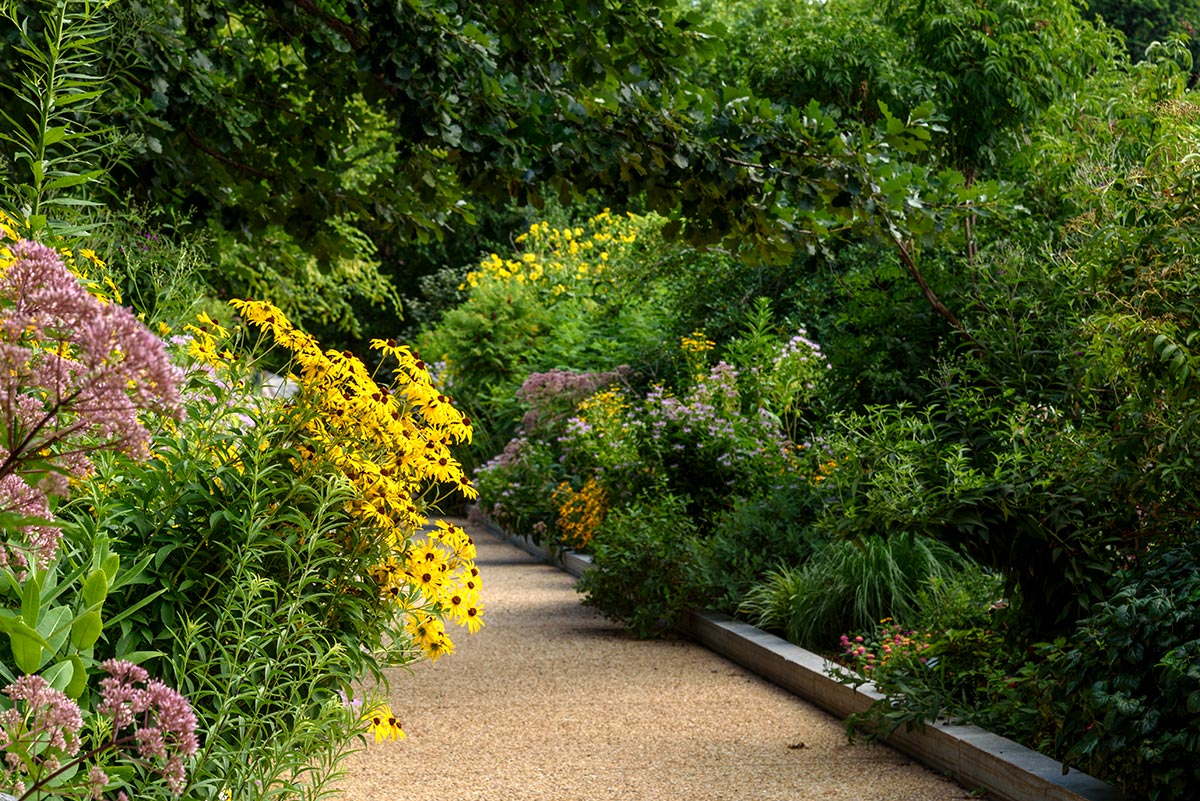 The Pollinator Garden at the National Museum of Natural History bursts with a variety of blooms to attract pollinators of all kinds. 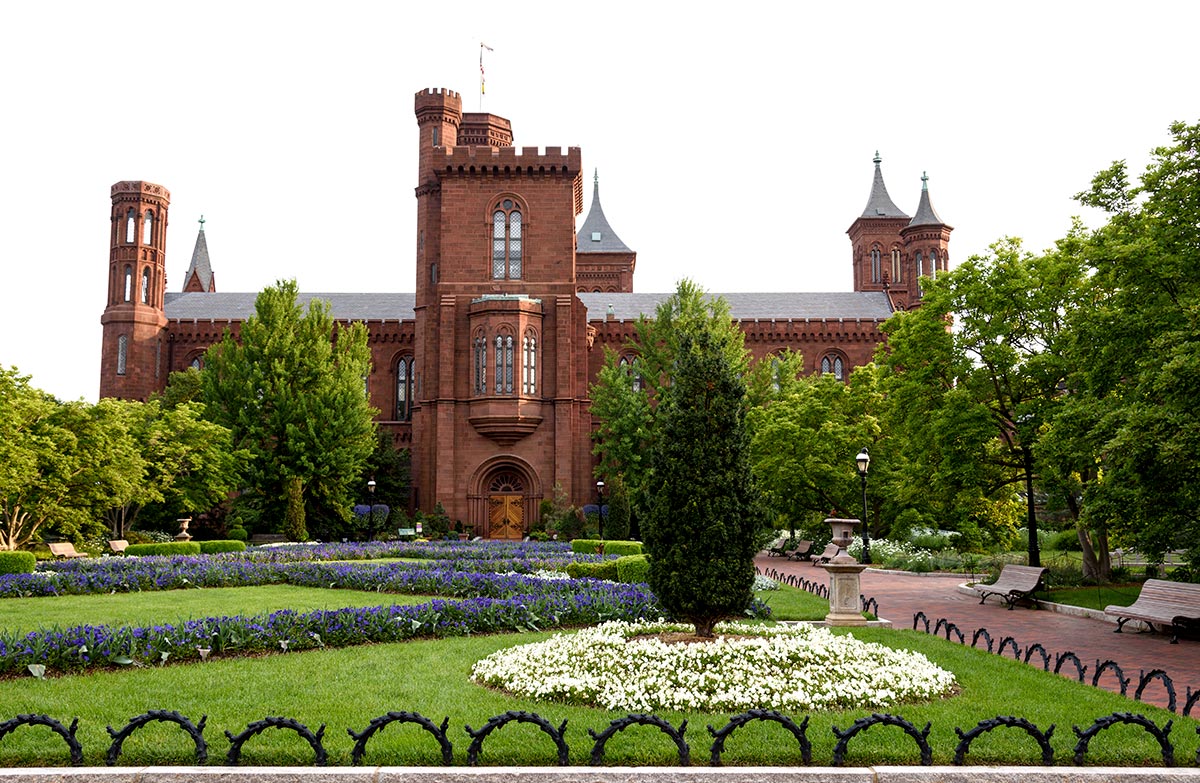 Before any visitor enters a Smithsonian museum along the National Mall they are first greeted by a garden. 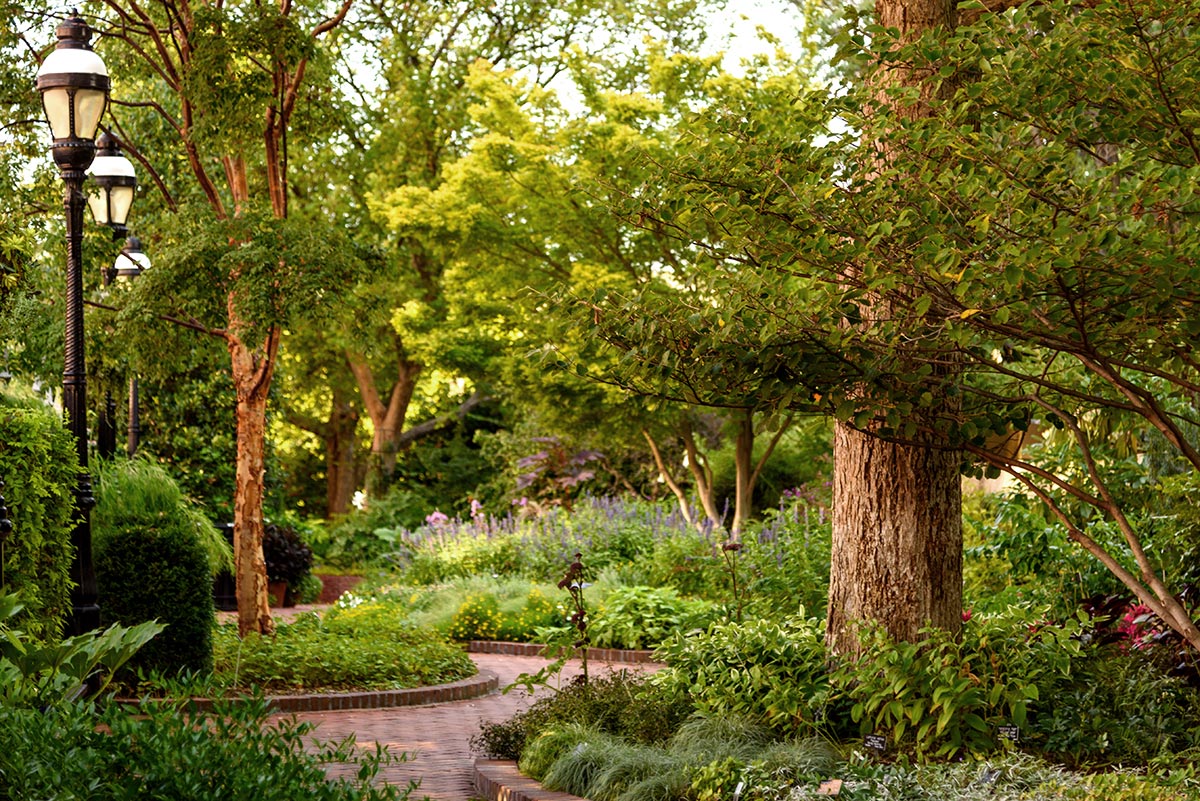 The winding brick path of the Mary Livingston Ripley Garden transports visitors into a botanical bliss. 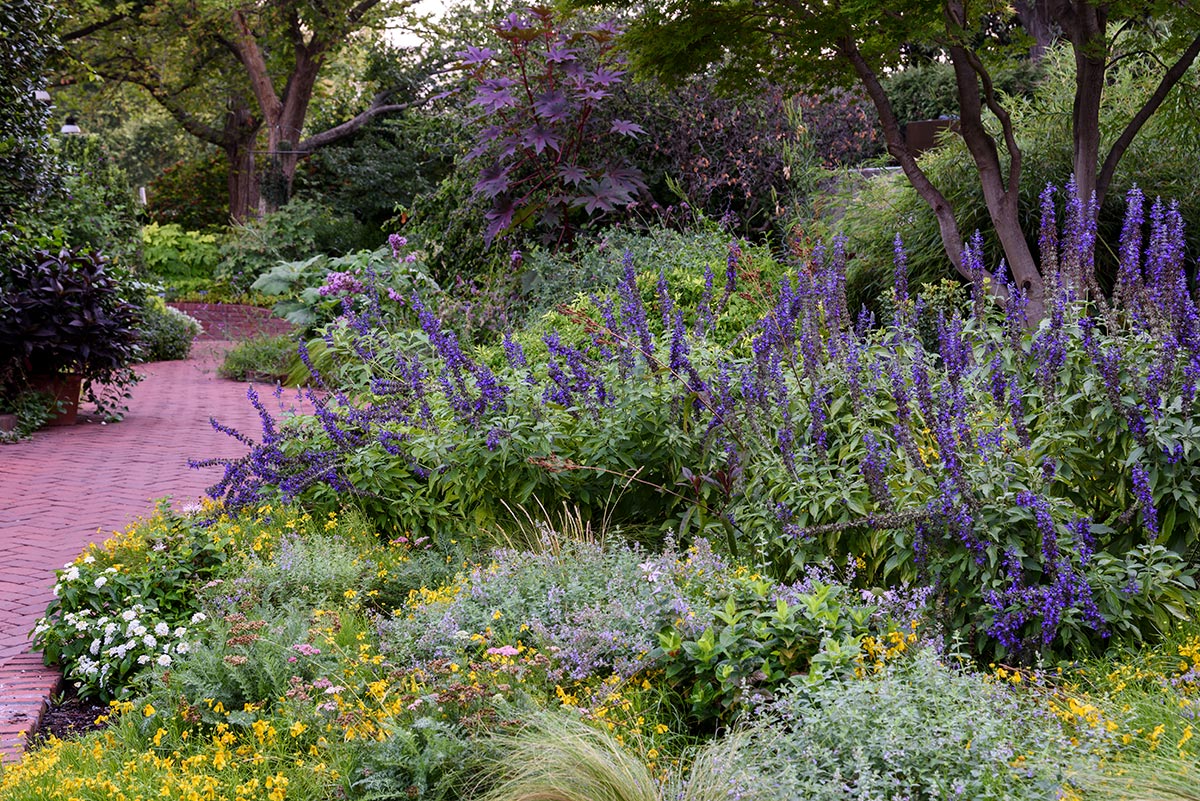 As a vital and vibrant part of the Smithsonian experience, Smithsonian Gardens mission is to engage, inform, and inspire. 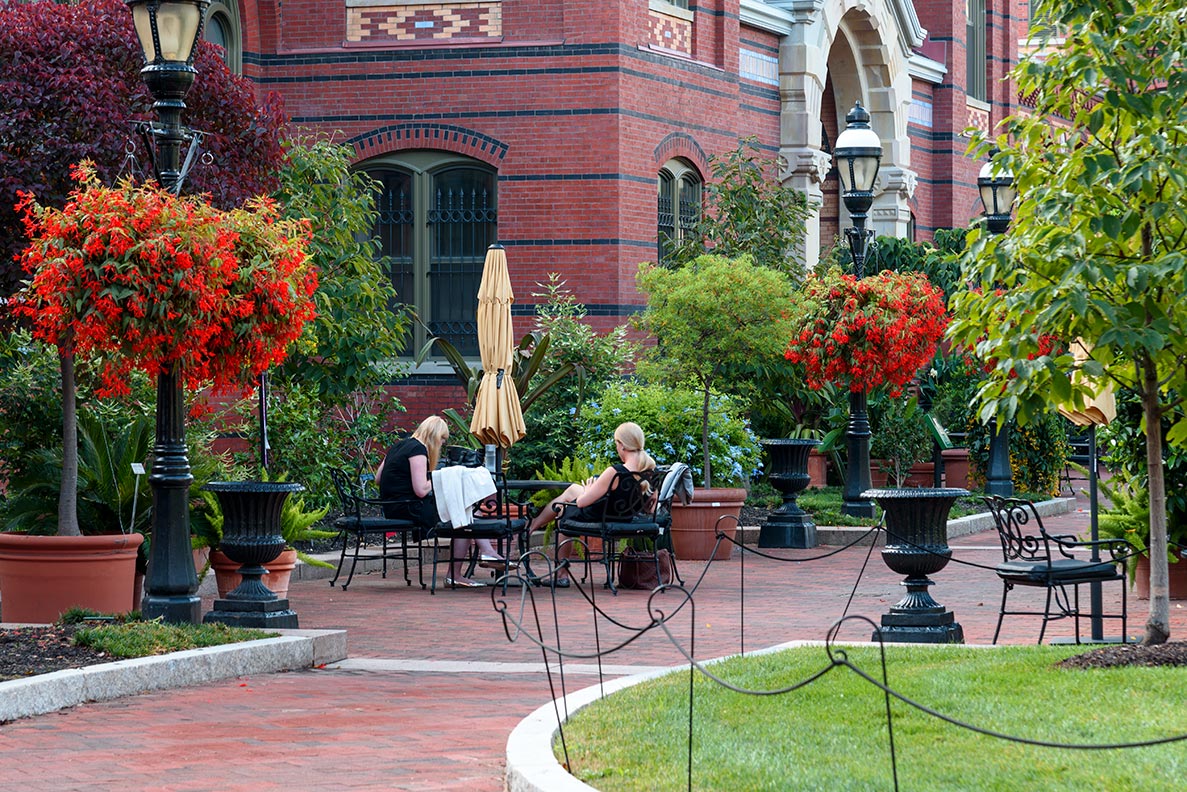 Smithsonian Gardens creates a place to connect to people and plants in the heart of Washington, DC. 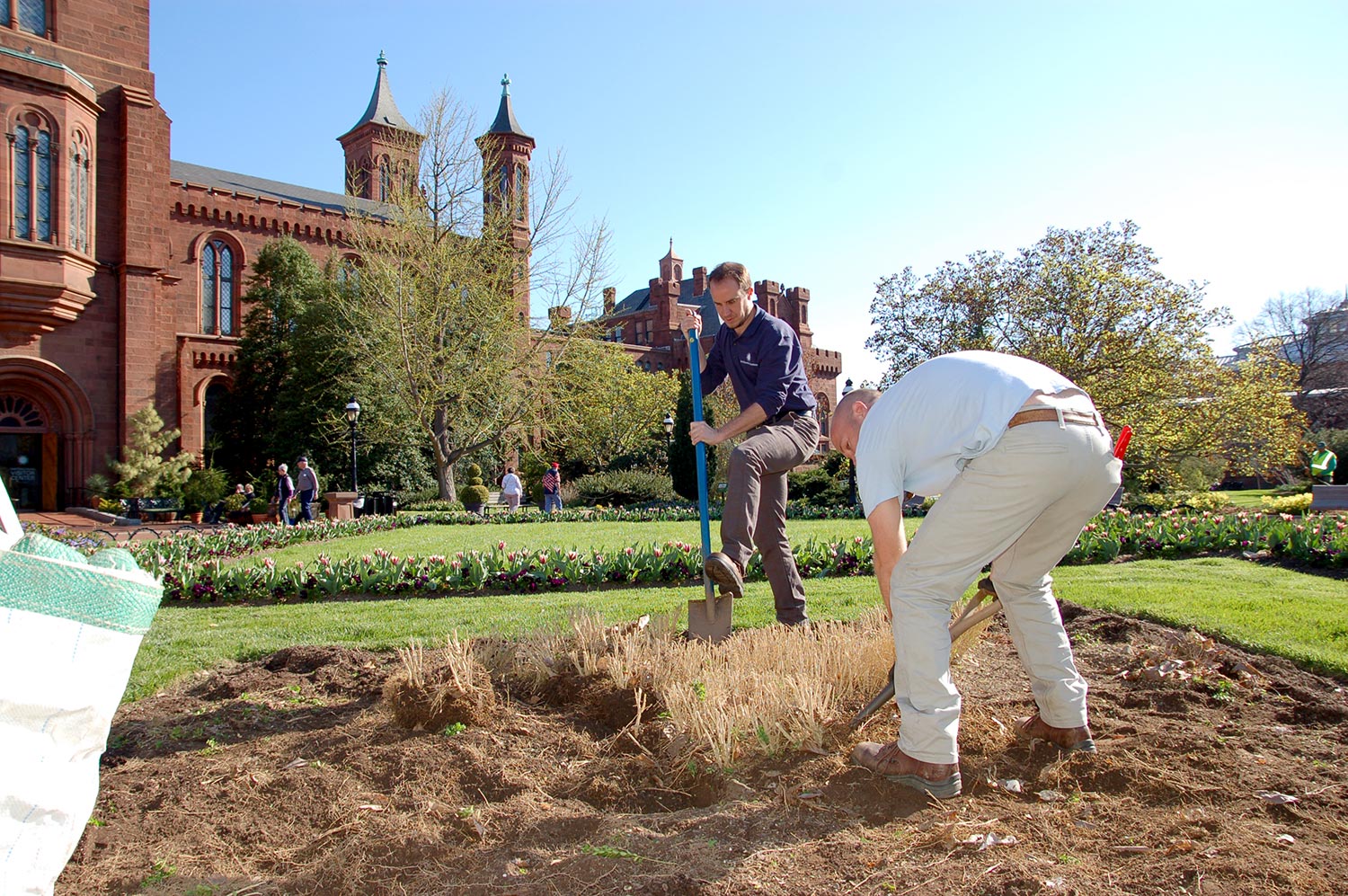 James works with his staff to replace boxwood fleurs-de-lis, a decorative element of the formal parterre behind the Smithsonian Castle. 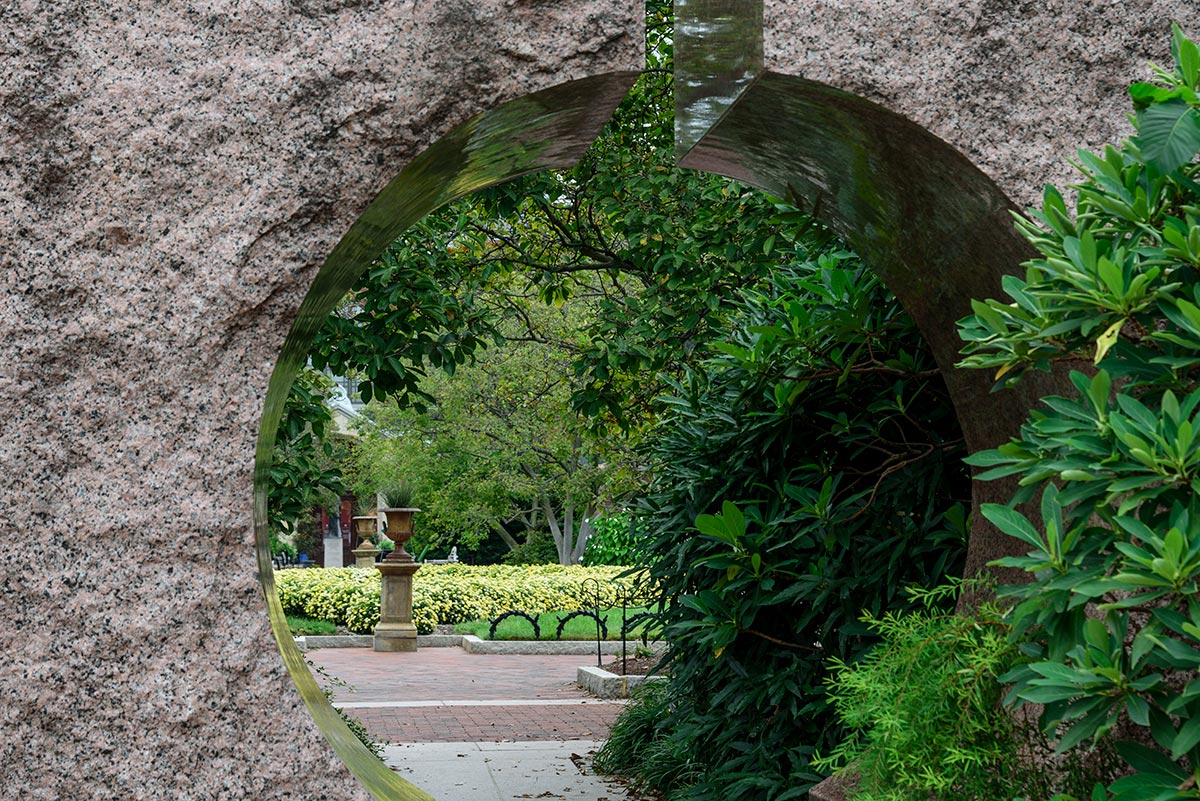 The Moongate Garden forms a window drawing guests towards The Parterre. 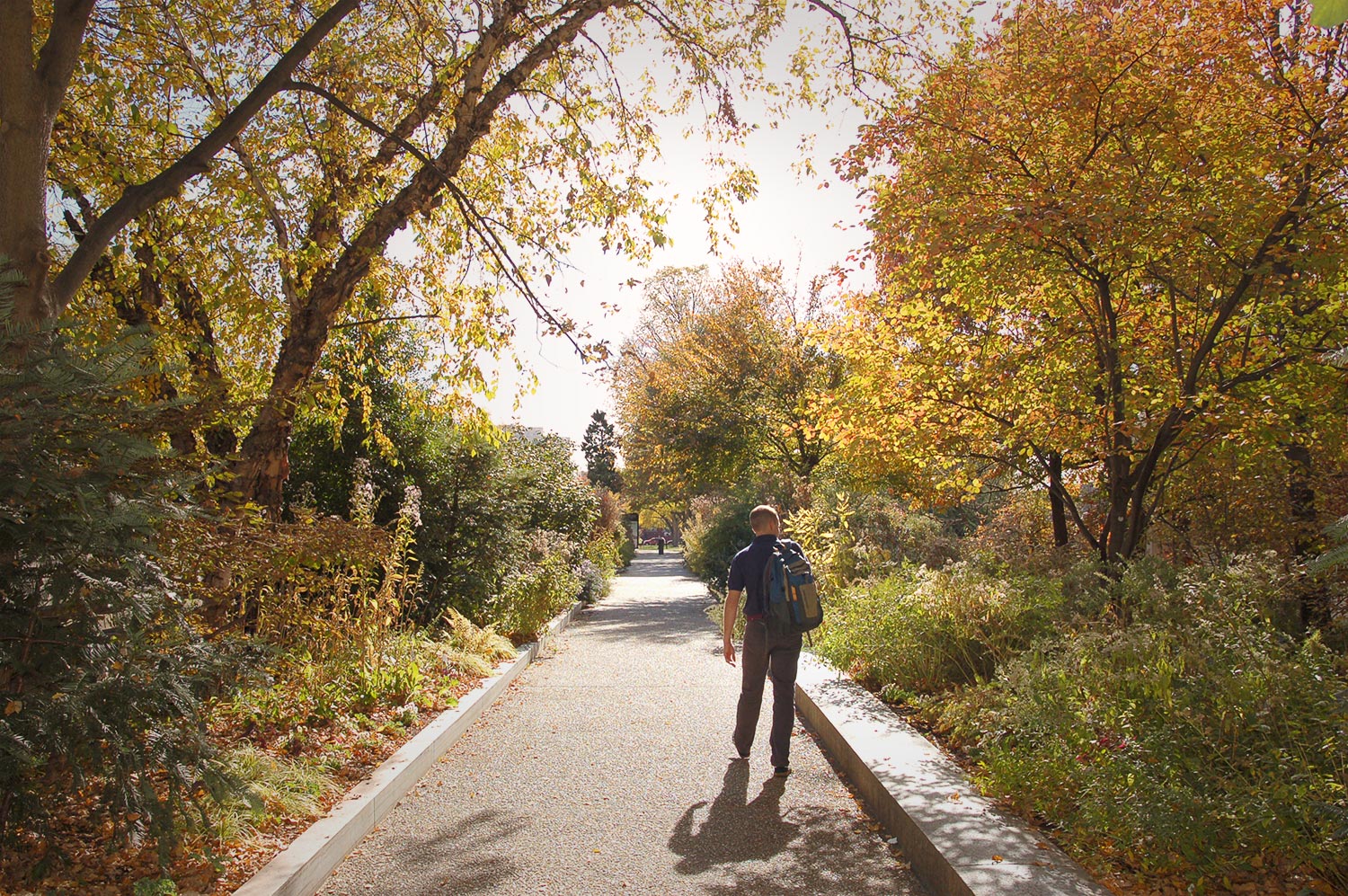 James leaves work through the Pollinator Garden, he must ensure the gardens are ready to welcome visitors 24 hours a day, 365 days a year.

All photos courtesy of Smithsonian Gardens