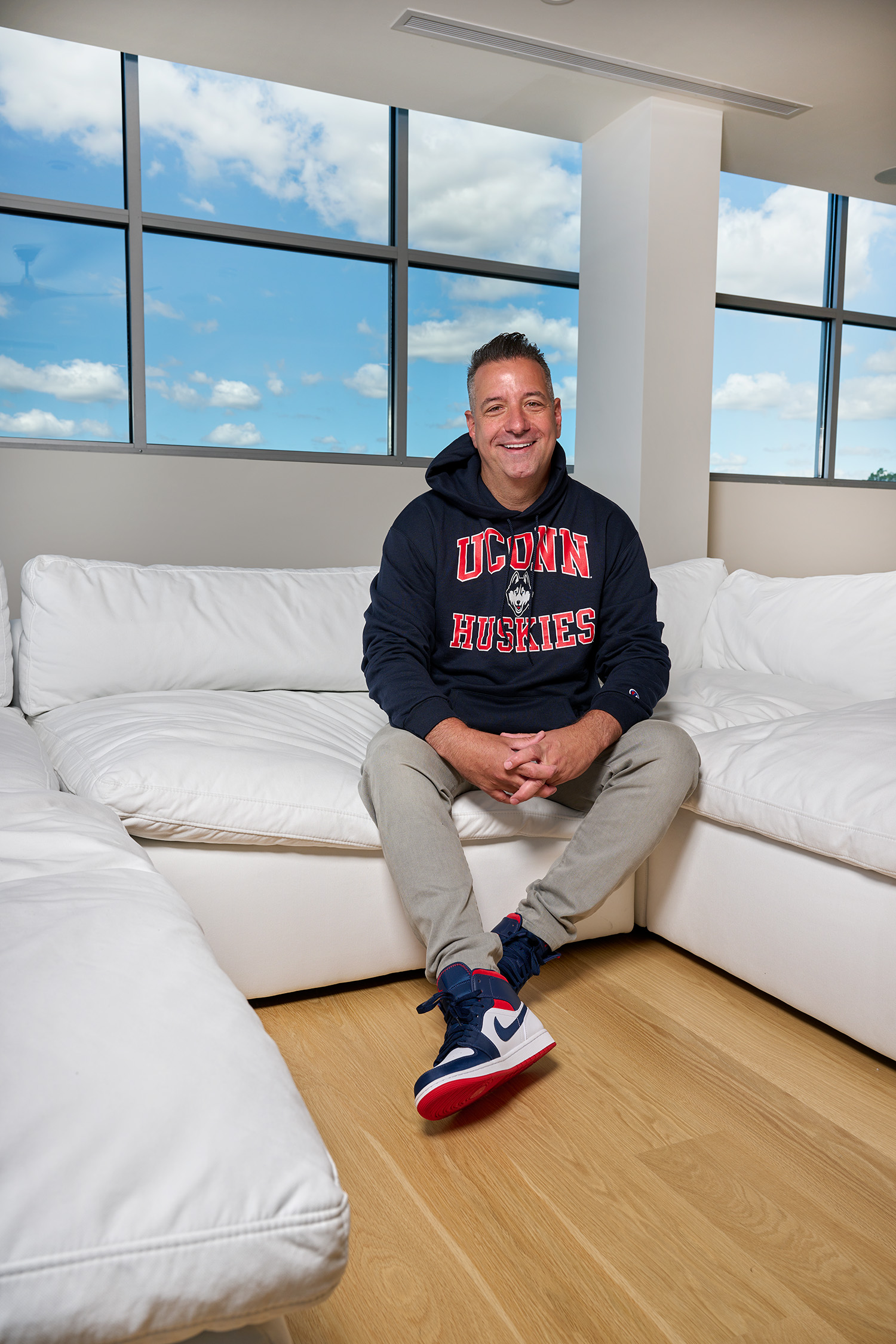 Marc D’Amelio ’91 (CLAS) — who with daughters Charli and Dixie is a social media and reality TV star — talks parenting, TikTok, bleeding blue, and Beavis and Butthead.

Marc D’Amelio ’91 (CLAS) describes himself as a man without a lot of hobbies. But he has helped his daughters, Dixie, 21, and Charli, 18, rise to TikTok stardom, moved cross-country, partnered with Abercrombie & Fitch on a new line of branded apparel, become a reality TV star, and won Best New Unscripted TV Series at the MTV Movie Awards for “The D’Amelio Show,” all in just three years during a pandemic. And while he may have moved to Hollywood, D’Amelio still has hometown and Husky pride.

The native Norwalker’s next project, branded D’Amelio Huskies Collective, was created to help UConn student-athletes develop and control their own name, image, and likeness. We checked in with him while he was back home in Norwalk in July.

You are known as a true-blue Husky.

When I went there, UConn was an underdog — it was a school that was affordable. I transferred from community college and it’s almost as if I grew with the school. I remember telling my grandmother I was going to UConn, and she thought I was going to Canada! And now when you say UConn, there’s not a person who follows colleges who doesn’t know where it is.

And my love of the City of Norwalk is so important to me, for similar reasons. We’re surrounded by all these affluent towns, and sometimes the schools get a bad rap. When we had the opportunity to move to Westport or Darien, we came back here to Norwalk. I’m loyal in that way. And that’s the same way I feel about UConn. If I can create a buzz about the University of Connecticut, if I can use my platform to do that, I’ll do it. I do think sometimes people who follow me for Dixie and Charli information go, “Aw, he’s talking about the University of Connecticut again!”

I don’t know what it is. It’s just that time of your life when you’re figuring things out and learning how to be on your own and navigating through life, and UConn helped me do that. I didn’t meet my wife at UConn, but my roommate from college ended up running World Gyms in NYC, and my wife was a personal trainer there. If I didn’t go to UConn, I would never have met my wife!

The fact that @marcdamelio called Huskies and Ted’s last night and paid for drinks for the students due to the fact that @UConnFootball won should not go unnoticed. Marc’s a helluva alum and supporter of the Revolution here. Love it!!!! #ThanksMarc #UConnNation 🐺🏈🍺 https://t.co/0RiduW4bCM

Where did you spend most of your time at UConn?

I transferred up there and lived in Towers and joined Sigma Phi Epsilon fraternity. And I DJ’ed at Huskies.

What kind of music did you play?

R&B and hip-hop. It happened as kind of a fluke. It was one of those long weekends where everyone came back on Sunday. The manager said, “We have such a crowd, I wish we had some music,” and I said, “This kid has all these records, I can go grab ’em.” And then we performed, and the place went wild. The manager said, “Do you want to work here?” And I ended up becoming the Thursday night DJ for two years.

I DJ’d at Huskies from 1989 to 91. I tried to remember everything I used to play and put it in this Spotify playlist.

Tell us a little about the D’Amelio Huskies Collective.

What I’m trying to do is create a personal brand development collective, where we bring not just the best basketball players, the best football players, but have a diverse collective — I want to have at least one student from every sport and help them develop deals with companies.

What did you think of social media sites like TikTok when you first learned about them?

I’m in the apparel industry. My showroom had Instagram, and I’m definitely an early adopter even though I’m a little older than the demographic of people who use these sites. I saw Vine come and go, so first I thought, “Oh, this is just like Vine.” To be quite frank, I did not get it at first. I did not see the appeal, and I certainly didn’t understand why my daughter Charli was becoming really popular. Especially because, where on Instagram people tend to show their best self — they get the lighting right, they use filters — TikTok was more authentic.

Some of the things I remember saying to Charli originally: “I just saw that video, and your bed’s not made, and your clothes are on the floor!” We would never see that on Instagram. It would be your perfect self. Once I got over that, I guess I just realized that while there is so much on social media of people trying to portray this persona of who they are, or who they want to be, TikTok became this platform that shows your real self, your authentic self.

Charli is now one of TikTok’s biggest stars. How did you feel when she first became internet famous?

I was comfortable with social media. I grew up in a single-parent household, and I had an abundance of freedom. I never abused that freedom. With that said, I know that a lot of parents rightfully worry about the influence of social media. I started off with the girls on Mac computers with cameras on them, then iPhones, and then we gradually got into social media with the understanding that you have a personal brand, and what you put out there could potentially be out there forever. I do think it’s really important now, for whatever you’re doing, to be involved in social media. People say, “I graduated from Harvard or Yale,” and I think, “Wow, they must be really smart.” And if someone has two million followers on Instagram, I think, “What do they do?”

I can tell you a hundred stories about how we’ve had to navigate through the notoriety. People knocking on our door at all hours of the day, caravans of kids rolling up, getting swatted, someone delivering a hundred pizzas to our house. All those things happen. But most of the interactions we have with the public are incredible — little girls crying when they see Charli. I try to remind my kids what they were like when they had their first interaction with someone they idolized. They’re really good. They have a clothing brand called Social Tourist, and we opened a store with Abercrombie & Fitch. There were like 300 people out front, and they sat and had a personal interaction, sometimes a minute or longer, with every single person there.

That sounds amazing. But your girls have also openly struggled with anxiety. Can you give an example of how you as a parent turned anxiety around, and helped them grow as people in this context?

When I grew up, my parents were divorced, my mom worked two jobs, doing everything to put food on the table — and there was a level in my head where I just wanted to give my kids everything that I didn’t have. And I think that happens to parents, many times when kids have anxiety, they look at it and they say, “Why are you depressed? You have everything!” I used to open the refrigerator and there was nothing there. I had to learn to cook. My kids open the refrigerator and it’s full of food. One thing I’ve learned, as far as parenting — you can’t parent based off what you wanted or didn’t have as a child, because they’re not experiencing the same things. If you just look at it as “I don’t understand why you’re anxious, why you’re depressed,” you’re doing them, and your relationship, a big disservice.

We’ve also learned a lot through the show. If someone says something negative about Dixie or Charli and it gets 100,000 likes, those are 100,000 people we don’t know. I would argue it’s harder for the kid who goes into their high school, and someone they sit next to in class, who they used to be friends with says something negative to them. It’s more personal. People look at us [and say], “How do you handle it?” We handle it because we’re reading the comments of strangers! You have to deal with it talking to your neighbor.

What is most fun about your family’s life now?

It’s so surreal, it’s just nonstop cool stuff and I’m constantly pinching myself. Seeing my daughter Dixie perform at Madison Square Garden was pretty cool. And winning the MTV Unscripted award as a family — I grew up with MTV, and to get that popcorn award was pretty cool.

MTV! Since you brought it up: Beavis or Butthead?

Some people say Butthead was a little more intellectual.

MTV is such a cultural icon.

Growing up in the 80s, when MTV first started, from Michael Jackson to Aerosmith — and Run-DMC put hip-hop on the map — that represented culture in general. It was such a big part of my life. Now for my kids, there are hundreds of places. YouTube, social media. A show on Netflix. A show on Hulu. They have to go everywhere. I don’t know how they navigate through all the streaming services, all the social media platforms. It’s pretty wild how they get their culture. 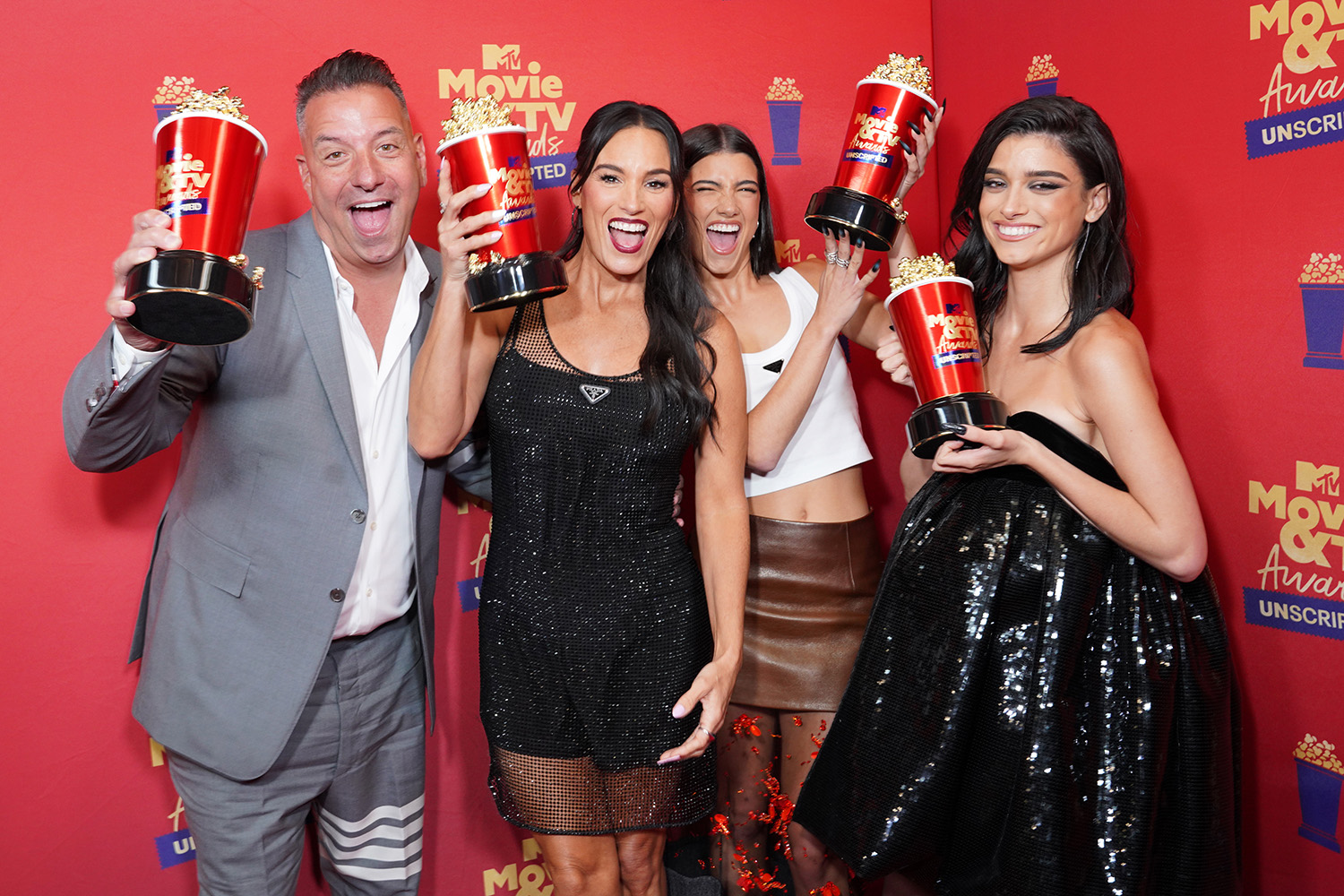