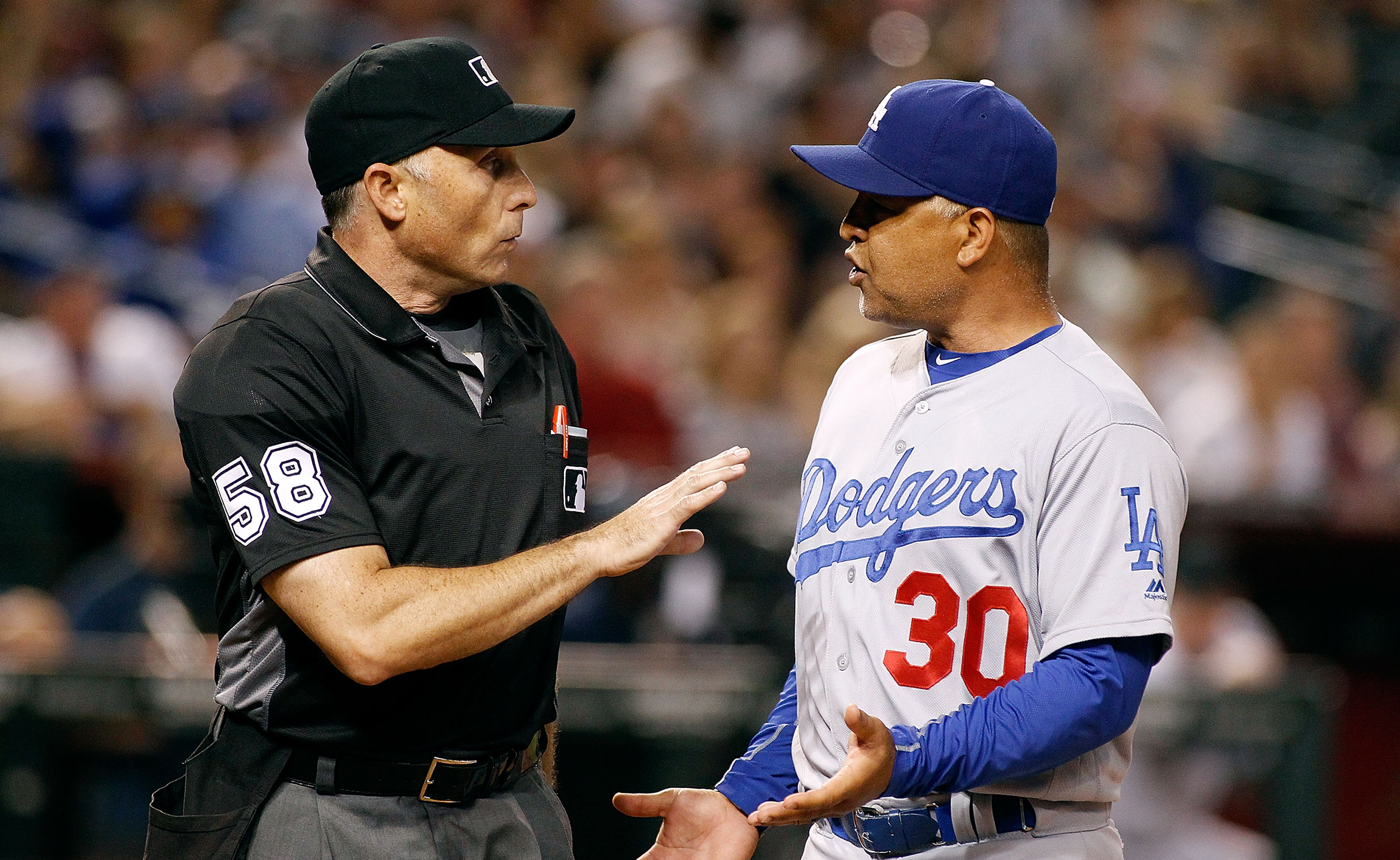 From spitballs to spin rates, these two alums have stayed with every curve thrown at them in a combined four decades of umpiring Major League Baseball.

The last three years our roles have changed,” says Jim Reynolds ’91 (CLAS). “The scrutiny with the pitch track system, the box, has added a lot of pressure. When Danny and I started, each umpire had their strike zone, and as long as they were consistent, everyone was happy.”

“The last three years our roles have changed,” says Jim Reynolds ’91 (CLAS). “The scrutiny with the pitch track system, the box, has added a lot of pressure. When Danny and I started, each umpire had their strike zone, and as long as they were consistent, everyone was happy.”

“I’ve got a guy out there throwing 97 miles an hour, trying to fool a batter. He fools the batter. I’ve got a catcher trying to catch it, trying to pull me to where it actually crosses the plate, while going through a box — ­and I’m the only guy that can’t see it,” says Reynolds. It feels overwhelming at times but “our guys are really, really good at what they do. The ability of umpires right now is the best it has ever been.” 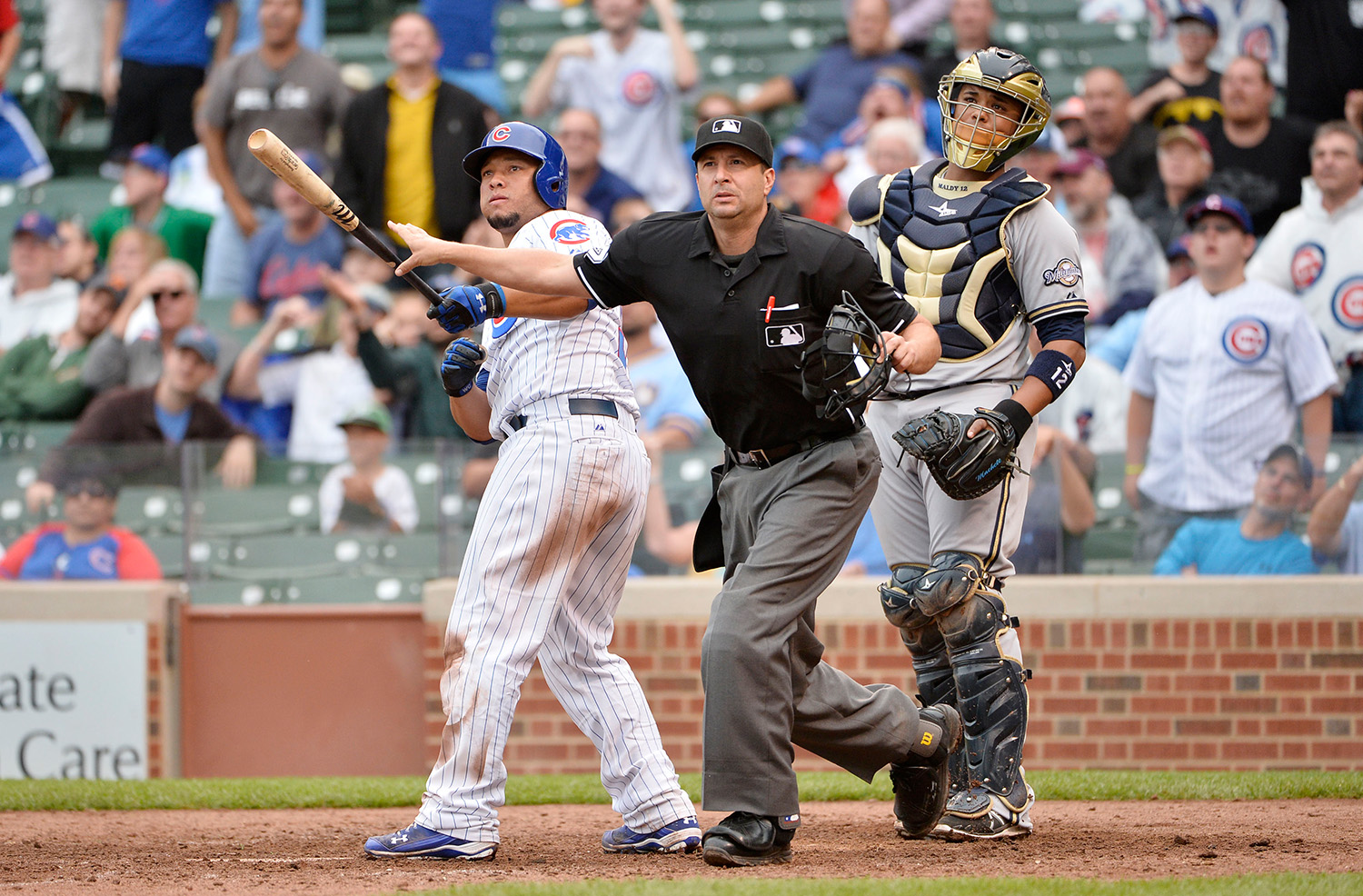 Another recent challenge is Major League Baseball’s crackdown on illegal substances — tasking umpires with banned substance inspections, which makes for some awkward encounters. Last season, the Oakland A’s Sergio Romo dropped his pants when Iassogna headed to the mound to inspect the baseball. Substance checks, spin rates, electronic strike zones, and instant replays are now status quo at the major- and minor-league levels.

“When Jimmy and I came up,” says Iassogna, “if you had a play that you wanted to see after the game, you asked the club to get the VCR tape and hopefully they taped the game, and you’d put that tape in, and you’d rewind it and it’s standard quality. You would say, it looks like I got it right or it looks like I got it wrong. Now everybody in the stands has an HD TV in their hand, and they’re watching everything, and in real time.”

“When you get hired by MLB it's a feeling of utter relief,” says Iassogna. “When the World Series call comes, it's pure joy.”

It was the first week of classes in September of 1987, and a fire drill commenced at Tolland Hall on North Campus. Two Connecticut freshmen noticed each other wearing high school football jackets and realized they had played against each other.

Iassogna had been at St. Joseph High in Trumbull, and Reynolds went to South Catholic High in Hartford. They discovered they both had played baseball at various levels and Iassogna, the son of a high school football referee, said he thought it would be cool to be an umpire. Reynolds agreed.

Their initial gigs came at the hands of longtime UConn baseball coach Andy Baylock, who had them practice the mechanics of making safe and out calls and taught them how to position themselves to make the right call (be perpendicular to the play to get the best view for a call on the bases, he said). Eventually, they earned one classroom credit and graduated from umping JV to varsity games.

“Coach Baylock considered his umpires part of the baseball program, and we were treated that way. Although the players were not always happy with our performance, they never took it past the ball field,” recalls Reynolds. “In fact, the best player at UConn at the time was Pete Walker, now the pitching coach for the Toronto Blue Jays, and I can remember several times where if guys were getting out of hand with the student umpires, he would actually shut it down.”

“I never had any negative interactions with any of the baseball players,” agrees Iassogna, adding, “I do remember officiating some intramural basketball games that got a little dicey!”

Baylock has their umpire jerseys framed on a wall in his house. “They were dependable as undergraduates, and they’re still that way. They’re very good at what they do,” he says. “I’m very proud of what they’ve done.” 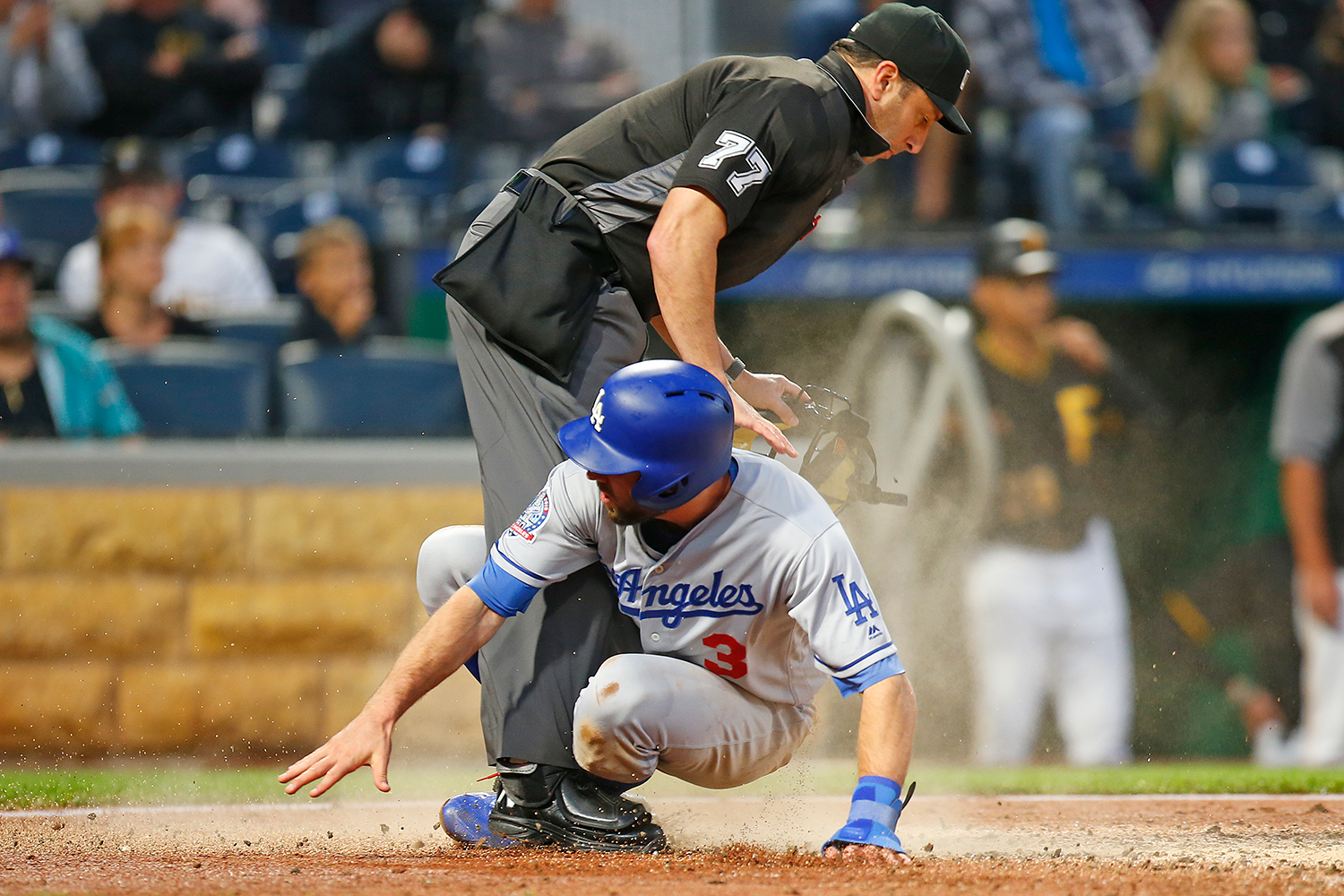 After graduation, Reynolds and Iassogna were roommates at the Jim Evans Academy of Professional Umpiring in Arizona where, after a 5-week, $2,000 course, they were each assigned to work in the lower levels of the minor leagues. “We didn’t work together again until the big leagues — postseason during championship series in 2015 (see the photo below) and 2020,” says Iassogna.

Like players, umpires progress through the minors, with top prospects getting promoted. And it requires sacrifice. There are only 76 major league umpire jobs, and umps tend to work for decades. The primary way for someone working in the minors to get to “the show” is to wait for a retirement or resignation.

“There were probably 100 nights while I was in the minor leagues that I questioned the path I chose after graduation,” says Reynolds. “There’s little pay, a lot of long nights driving, and not a lot of support. I was living with my parents until the age of 29 and didn’t own a car. So yeah, there were a lot of times where I thought about doing something else. But I enjoy the challenge of the job, and once I started the journey, my goal was to get to the big leagues, so they were going to have to release me before I ever quit.”

Iassogna worked 12 years before reaching the majors full-time. “I spent almost five seasons at the A ball level. I was ready to pack it in at the end of the season because there weren’t supposed to be any more promotions. My wife Denise drove up from Atlanta to Maryland, and encouraged me to keep the faith. One day after she left I was promoted to AA. I spent 1 ½ years there, then a little over 1 ½ years in AAA, and then went to the big leagues.” 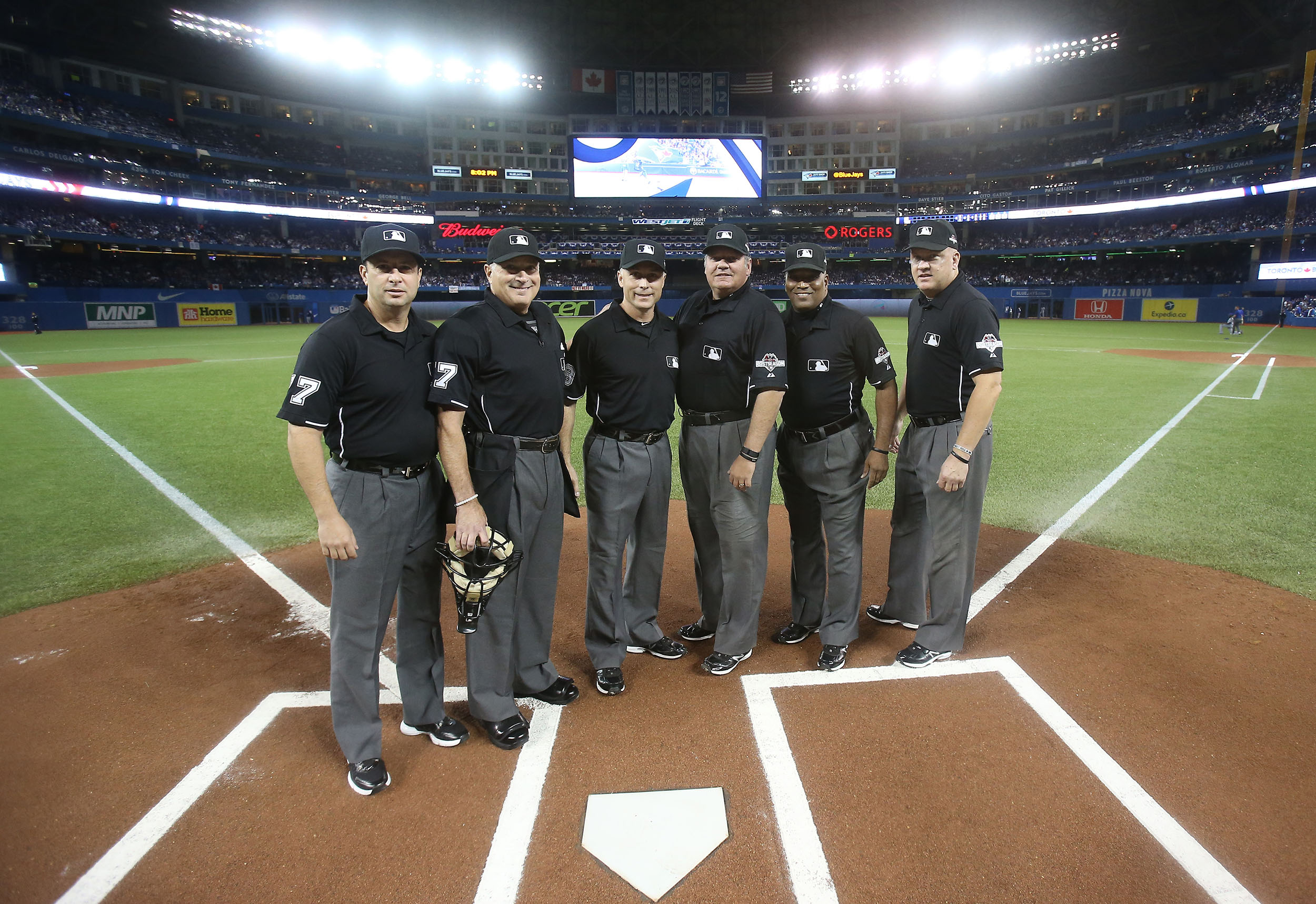 Reynolds, far left, and Iassogna, third from left, before Game 3 of the 2015 American League championship series in Toronto.

Reynolds was prepping for a game in Rochester, New York, on June 2, 1999, when he got a call from the American League supervisor of umpiring informing him he’d be working major league games on a fill-in basis starting in two days, when the Atlanta Braves would take on the Boston Red Sox.

“Growing up in New England my family were Red Sox fans, and I grew up going to baseball games at Fenway Park. When I got the call to work my first big league game and found out it was going to be at Fenway, it made it even more special,” says Reynolds, who worked third base that game.

“I really had no impactful calls,” he says, “but just remember being amazed at how much quicker the major league game was than the minor league AAA game. It was also extra special because my whole family was able to attend and spend the weekend in Boston with me.” By late July, he was a full-time major-league umpire.

Iassogna also started as a fill-in umpire at third base during a Red Sox game — against Texas on Aug. 20, 1999. “I just remember it feeling like the biggest stadium that I had ever worked,” he says. In 2004 he got the call that he’d be working in the majors full-time. “Like everyone that’s ever been hired, it was a mixture of pure happiness and unbelievable relief. Of course I called Jimmy.”

Unlike players, umpires have no homestands, and are on the road most of the season, with a one-week vacation four times a year. When they make mistakes, it’s in front of thousands of fans and a television audience of millions.

“After almost 30 years of doing this job, they still eat me up. Actually they bother me more than ever before. In real time, I have to quickly move on, refocus on the job, but afterwards it’s always bad dreams and anxiety. Even after I dissect the play, I’m not very sympathetic to myself,” says Iassogna.

Reynolds agrees. “Mistakes will affect me more than anyone else, I promise you.” After each game he watches video to see why he made the wrong call so “I won’t make that mistake again,” he says.

There’s a physical toll, too. Umpires do get hurt. Reynolds, who now lives in Arizona with his wife Deanna and son James, says he’s had eight concussions while umpiring in the major leagues. On Aug. 24 of last season, he was hit on his face mask by a foul ball in the second inning of a game between Houston and Kansas City. He felt okay at first, but in the fifth inning began to notice his vision was off. A trainer took him out of the game. He was out for the season and disappointed. “I’d like to think I’d have been asked to work in the postseason, but it was the right decision.” 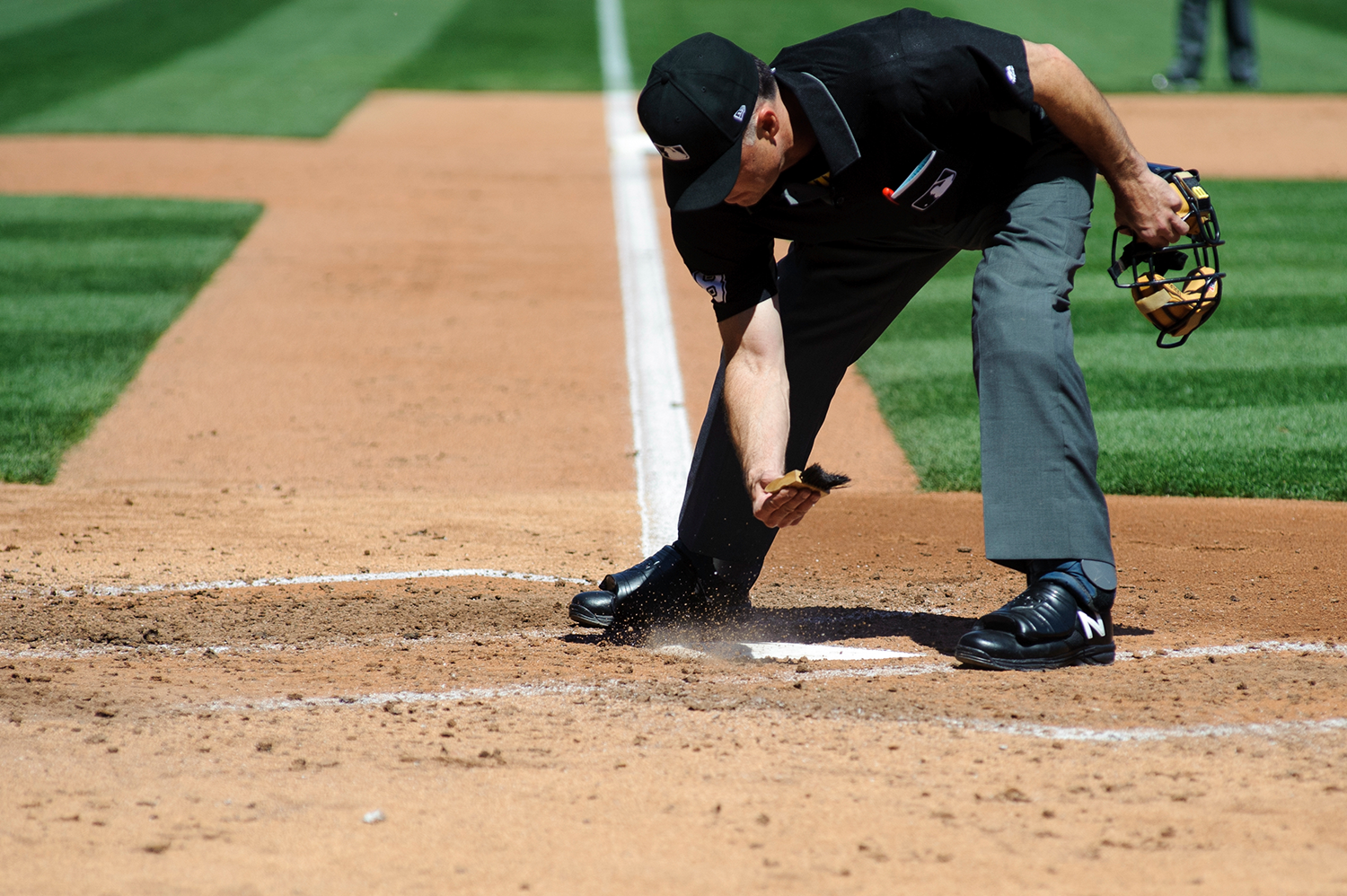 Iassogna during Boston Red Sox vs. Minnesota Twins in Minneapolis May 7, 2017.

Both Iassogna and Reynolds have been named crew chiefs, giving them the final say in decisions such as stopping a game for bad weather or getting colleagues to debate a call or interpret a rule.
In 2012, Joe Torre, then head of field operations for MLB, told Iassogna he’d be umpiring in the World Series. “When you get hired by MLB it’s a feeling of utter relief,” says Iassogna. “When the World Series call comes it’s pure joy.”

“The series feels like an entire season compressed into 10 days. It’s intense, but everyone wants to be there more than anywhere else. The crew bonds together, roots for each other, and is entirely focused on every pitch,” he says. “The second World Series is probably more difficult because you know the level of concentration needed to excel. You’re more comfortable though with the peripheral aspects, like the crowded locker room, crowd intensity, media attention. The first time you’re wide-eyed and everything is new.”

When Reynolds got his first World Series in 2014, he admits to some nerves. He wondered, “Can I do my job on the biggest stage at the biggest time? Like in golf, would your swing hold up on Sunday at the Masters? It’s a tremendous honor, the culmination of everything.”

Umpiring at this level is extremely challenging, says Matt McKendry, MLB’s VP for Umpire Administration. “The expectation is perfection and umpires are evaluated on each pitch, play, and situation handled on and off the field. The job has evolved quickly in recent years as we have expanded our use of technology for strike zone tracking, instant replay, and other fan engagement efforts. Both Dan and Jim have performed well in adapting to this ever-growing role.”

“Danny and I understand the world we’re living in now as far as our profession,” says Reynolds. “We’ve made the adjustments the best we can, and we go out there and we still do the things that got us to the big leagues. We’ve also recognized that the game’s changed. And you have to get on board. If you’re not on board, then the game is gonna pass you by.”